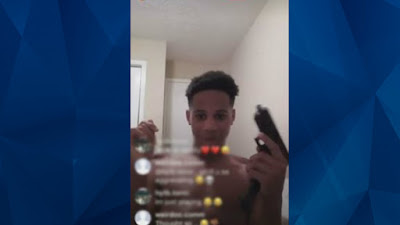 A 13-year-old Georgia boy is dead after accidentally shooting himself
while filming on Instagram Live on Monday. Authorities are now
investigating how a young boy got his hands on a gun.
NBC 11 Alive reports
that Shaniqua Stephens watched her teen son, Malachi Hemphill, take out
the trash and make his way back to his bedroom on Monday evening, a
usual, routine chore for the boy. She didn’t realize that within
minutes, he’d be dead.

“I heard a big boom. I couldn’t tell if it was a gun shot or what. I just knew that it was something that was wrong.”

Stephens and her daughter rushed upstairs after hearing the loud
boom, and went to straight to Malachi’s bedroom. After breaking into
this locked door, Stephens saw her 13-year-old boy on the floor, laying
in a pool of blood. Her daughter started screaming to her to turn
Malachi’s phone off after she noticed he filmed the entire incident on
Instagram Live.

“We kicked in the door. We found him just laying there in
a pool of blood. My daughter screamed and said, ‘Mom turn his phone
off!’ As I proceeded to look at his phone he was on Instagram Live.”

While Stephens struggles to come to terms with her son’s untimely
death, she urges parents to take extra measures to ensure their children
are safe.

“(The) Detective asked me yesterday, ‘What was Malachi’s Instagram
name?’ I couldn’t tell him what Malachi’s Instagram name was because he
would make up so many different pages. Monitor their phones, just
monitor your children. More now than anything….”