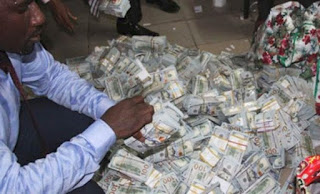 The Federal High Court in Lagos has granted the request of the
Economic and Financial Crimes Commission, EFCC, that the $43,449,947,
£27,800 and N23,218,000 recovered from an Ikoyi, Lagos, apartment be
forfeited to the federal government.

The total value of the money at the Central Bank official exchange rate is over N13 billion.
The EFCC recovered the huge cash, presumed to have been looted, on
Wednesday from an Osborne Street, Ikoyi apartment in Lagos State.

The anti-graft agency said it acted following a tip from a whistle-blower.

In his ruling, Justice Muslim Hassan ordered temporary forfeiture of the money to the government.
He adjourned further proceedings to May 5 for anyone interested or
wishing to claim the money and make case why it should not be
permanently forfeited to the government.