by metronews
in Politics
0

Governorship aspirant, under the ruling All Progressives Congress, APC, Dr. Olusola Ayandele, moved his campaign team to Ogbomosoland in his continued efforts at informing all the state’s royal fathers his wish to lead Oyo State come May 29, 2019.

According to him, “I am a son to all the kings in Oyo State and no son make such decision without seeking the blessings of his fathers.”

He was admitted into the palace of Oba (Dr.) Jimoh Oladunni Oyewumi, Ajagungbade III, Soun of Ogbomosoland while after formal introductions, he stated why he sought the respected king.

“First all, I would like to appreciate your acceptance to give me audience,” Olusola said, “and without wasting much of your time, I would like to officially tell you I wish to become the governor of Oyo State come 2019.”

“I know the contestants are many, but it’s my belief that once you endorse me,” Eruobodo said, “it is bound to be a success.”

“I am aware of some Ogbomoso sons, who have shown interests in the position,” Olusola continued, “but the elders say ‘if one’s son refused to be backed, it’s no crime to back a stranger’s.’” 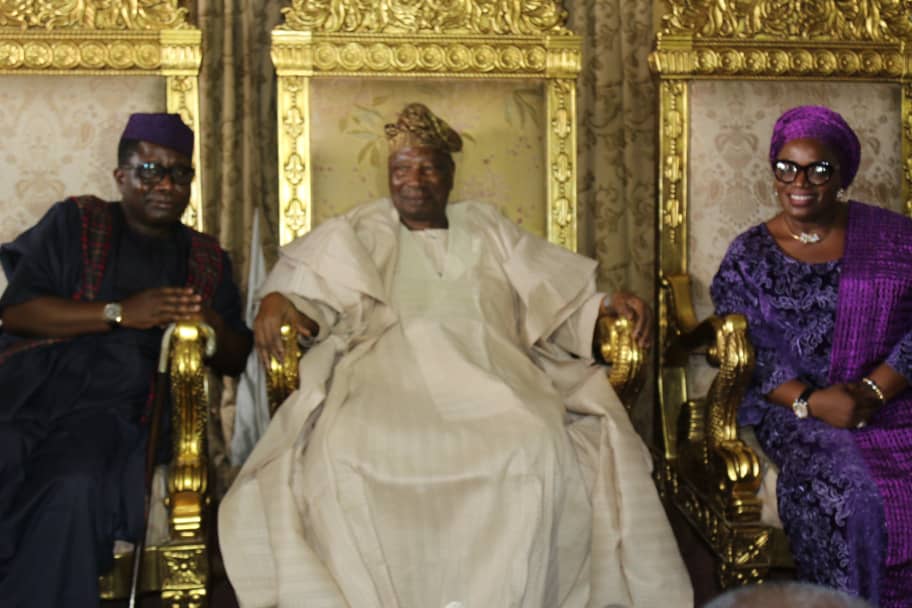 While listing out his plans for the state, Dr. Ayandele said he would never desecrate the throne when he becomes governor.

“By the special grace of God, when I become governor, we would put in place what a farm settlement should really look like.”

Olusola then told the king that free and compulsory education for all children till secondary school level, free health care for the women, children and other vulnerable in society are those things his government would ensure are taken for granted by the people of the state.

The seasoned engineer also pledged that all public servants would be paid 25th of every month.

While responding, the amiable king told him he is already successful in his bid while advising him not to forget people that stood by him.

“You’re already our governor,” Soun said, “but don’t forget your friends and always be humble to people around you.”

The Ajagungbade III, the first beaded king of Ogbomosoland, prayed for Dr. Olusola Ayandele before sending him on his way.

Dr. Olusola Ayandele is contesting to become the governor of Oyo State come May 29, 2019.

Agodi2019: You're worthy to be governor, Alaafin tells Eruobodo