In a continuous political consultations around Oyo State in a countdown to the ruling party’s governorship primary election, Dr. Olusola Ayandele has intensified his efforts at reaching out to the state’s traditional rulers in getting their endorsements and blessings to become governor come May 29, 2019.

Eruobodo, as he is popularly known around the state, visited Oyo town on a courtesy call to the imperial majesty of Yorubaland, the Alaafin of Oyo, Oba Lamidi Adeyemi III.

Dr. Ayandele, without wasting the royal time, made known his intention to be governor of the state and sought his royal blessings.

“When I become governor of Oyo State on the 29th of May, 2019 by God’s grace,” Olusola promised, “no one would die because of the inability to pay for medical services as there would be free and complete medical health service for the vulnerable in the society.”

“In the days of our past progressives, there was free education, working and successful farm settlements and free healthcare. 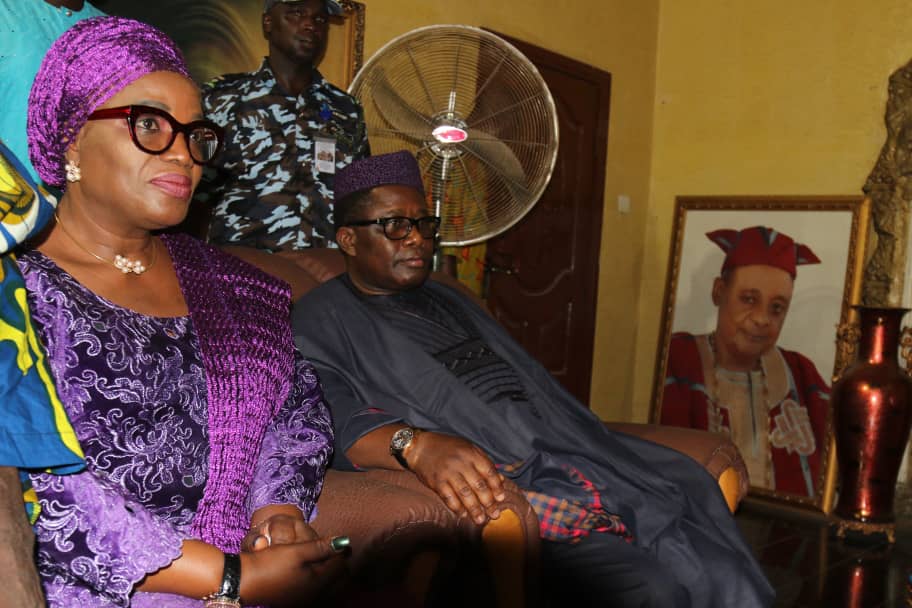 Dr. Olusola Ayandele and his wife, Dr. (Mrs.) Yinka Ayandele at the Alaafin of Oyo’s palace in Oyo State recently.

“It is my sincere promise to you the Alaafin and the entire good people of Oyo State that these are also my main priorities,” Eruobodo submitted.

On one of his plans for the respected monarch, Dr. Ayandele said, “I would ensure that the once existing House of Chiefs would be resuscitated and Alaafin would be its chairman in Oyo State.”

In his response, Oba Lamidi Adeyemi III, the Alaafin of Oyo, said he never expected that his kind would come out to contest for governor from Ibarapa.

“Of all the contestants for governor in Oyo State, you’re the only one that has such a followership and all dancing like this,” the king said, “this means you’re indeed a worthy and good person to lead the state.”

The monarch then prayed, “May your motives and aspirations please the good people of Oyo.”

“I am very sure you wouldn’t be ungrateful like those before you,” the king continued, “May you be successful in your quest in becoming Oyo State governor”.

After this, the governorship aspirant Dr. Olusola Ayandele and his wife, Dr. (Mrs.) Yinka Ayandele with some few members of his team were then ushered into the private chamber of the king for a special consultation.

The visit was rated highly successful before the campaign train moved off.