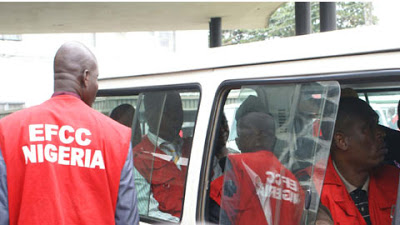 Operatives
of the EFCC had on February 3, 2017, stormed a building belonging to
the former NNPC boss and recovered a staggering sum of $9,772,000 (Nine
Million, Seven Hundred and Seventy Two Thousand United States Dollars)
and £74,000 (Seventy Four Thousand Pound Sterling) stashed in a huge
fire proof safe following which he reported to the Commission’s Kano
Zonal Office on February 8, 2017 and admitted being the owner of both
the house and the money recovered.

In a dramatic turn, Yakubu,
in a suit filed through his counsel, Ahmed Raji, SAN, is challenging his
detention since February 8 and demanding the enforcement of his right
to  dignity of person, personal liberty, fair hearing, freedom of
movement, private and family life and to acquire own property.

Aside
praying the court to shield him from further investigation by the EFCC,
he is also demanding a sum of N1billion as cost against EFCC and
Attorney-General of the Federation, AGF, who is the second respondent,
for the violation of his aforementioned rights.

Raji, while
adopting his written address urged the court to grant all the reliefs
sought by the Applicant (Yakubu). He stated that “the sum total of the
relief sought by the respondent is the release of the
Applicant/Respondent as the investigation is still going on”.

Though,
Raji admitted that the EFCC can investigate anybody, he, however, said
such should not be an excuse for unwarranted detention especially in a
situation where at the end of trial the person may not go to jail.

Raji
also told the court that he was not aware of Exhibit EFCC 4 (order from
Magistrate Court in Kano), adding that the Applicant/Respondent has not
been brought to the court or any court of law. He submitted that “the
exhibit is irregular and constitute a gross abuse of the proceedings of
this court”.

In his preliminary objection, Johnson A Ojogbane,
Counsel to EFCC told the court that it lacked jurisdiction to hear the
suit. He argued that “all the facts relevant to the
Applicant/Respondent’s application took place in Kano State which is
outside the jurisdiction of the Federal High Court Abuja”.

“It is
not in doubt that, the acts leading to this action filed by the
Applicant/Respondent all occurred in Kano. He was never invited to the
Commission’s Head Office in Abuja and never came to Abuja in respect of
the instant case. In view of this, the Federal High Court lacks
territorial jurisdiction to hear and determine the matter as the court
must have both subject matter and territorial jurisdiction to entertain a
case,” Ojogbane argued.

On the Applicant’s prayer for human
rights enforcement, Ojogbane argued that “the application is
incompetent, incurably defective and therefore robs this honourable
court of the jurisdiction to determine the suit.”

He went on to
add that the detention warrant that authorised the detention of the
Applicant/Respondent was obtained in Kano State as the EFCC is
investigating the allegations leveled against the former NNPC boss.

On
the other hand, the AGF, represented by T. A. Gazali brought an
application asking the court for more time to regularize its processes
that was filed out of time.

Justice Mohammed has adjourned to March 14, 2017 for further hearing.