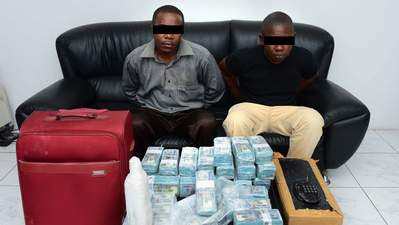 The Economic and Financial Crimes Commission today March 9, 2017 secured
the conviction of  four  counterfeit currency dealers before  Justice
Simon Amobeda of the Federal High Court Kebbi on a four count charge of
conspiracy and possession of counterfeit currency.

The convicts,
Usman Ahmed, Isiyaku Mohammed, Mohammed Abubakar Badadi and Rilwanu
Abdullahi were arrested by  officers of the Nigeria Security and Civil
Defence Corps at Birnin Kebbi while in possession of a sum of N583,000
(Five Hundred and Eighty Three Thousand Naira Only) in fake one thousand
Naira notes.

The case was eventually transferred to the commission for further investigation.

After listening to the charge, all the accused persons  pleaded guilty to the four count charge.

In view of the plea of the accused persons, prosecution counsel,  N.K Ukoha urged the court to convict them accordingly.

Justice Amobeda  convicted all the accused persons as charged.

Before
sentence was delivered,  counsel for the defendants S.B Ka’oje pleaded
with the court to tamper justice with mercy given that the convicts are
first time offenders with no criminal record. He added that the convicts
are all family men with children and many defendants.

In his
ruling, Justice Amobeda sentenced the convicts to five years
imprisonment on each of the four count charge.  The sentence is to run
concurrently and also to begin from the day of their arrest.

One
of the charge read that “You Usman Ahmed,  Isiyaku Mohammed,  Mohammed
Abubakar Badadi and Rilwanu Abdullahi on or about 8th July,  2016 in
Birnin Kebbi within the jurisdiction of the Federal High Court did
conspire among yourselves to do an unlawful act to wit; being in
possession of 583 pieces of 1000 Nigeria Naira Notes and thereby
committed an offense contrary and punishable under section 516 of  the
Criminal Code”.