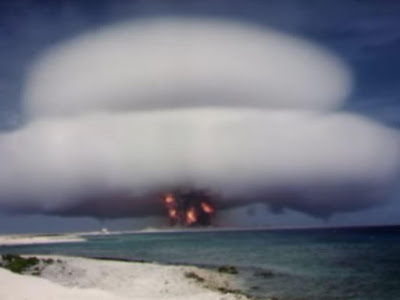 President Trump has egged on a new arms race. Russia violated weapons
treaties to upgrade its nuclear arsenal. North Korea is developing
long-range missiles and practising for nuclear war — and the US military
is considering preemptive attacks on the isolated nation’s military
facilities.
Meanwhile, nuclear terrorism and dirty bombs remain a sobering threat.

Though these events are unlikely to trigger the last-ditch option of
nuclear war, let alone a blast in your neighbourhood, they are very
concerning.

So you might be wondering, “If I survive a nuclear-bomb attack, what should I do?”

Michael Dillon, a Lawrence Livermore National Laboratory researcher,
crunched the numbers and helped figure out just that in a 2014 study
published in the journal Proceedings of the Royal Society A:
Mathematical and Physical Sciences.

Likewise, government agencies and other organisations have also
explored the harrowing question and came up with detailed
recommendations and response plans.

The scenario
You are in a large city that has just been subjected to a single, low-yield nuclear detonation, between 0.1 and 10 kilotons.

This is much less powerful than the bomb dropped on Hiroshima — about
15 kilotons. However, it’s not unlikely when looking at weapons like
the new B61-12 gravity bomb, which is built by the US, maxes out at 50
kilotons, and can be dialed down to 0.3 kilotons. (Russia and Pakistan
are working on similar so-called “tactical” nuclear weapons.)

Studies have shown that you and up to 100,000 of your fellow citizens
can be saved — that is, if you keep your wits about and radiation
exposure low enough.

One of your biggest and most immediate goals is to avoid nuclear fallout.

How to avoid fallout radiation
Fallout is a mess of bomb material, soil, and debris that is
vaporised, made radioactive, and sprinkled as dust and ash across the
landscape by prevailing winds. (In New York City, for example, a fallout
zone would spread eastward.)

The best thing to do is to find a good place to hide — the more dense
material between you and the outside world, the better — then wait
until the rescuers can make their way to help you.

The US government recommends hiding in a nearby building, but not all of them provide much shelter from nuclear fallout.

Poor shelters, which include about 20% of houses, are constructed of
lightweight materials and lack basements. The best shelters are thick
brick or concrete and lack windows. Like a bomb shelter.
Hiding in the sub-basement of a brick five-story apartment building,
for example, should expose you to just 1/200 of the amount of fallout
radiation outside.

Meanwhile, hanging out in the living room of your one-story,
wood-frame house will only cut down the radiation by half, which — if
you are next to a nuclear explosion — will not do much to help you.
So, what do you do if there isn’t a good shelter right near you?
Should you stay in a “poor” shelter, or risk exposure to find a better
one? And how long should you wait?

Should you stay or should you go?
In his 2014 study, Dillon developed models to determine your best
options. While the answer depends on how far away you are from the
blast, since that will determine when the fallout arrives, there are
some general rules to follow.

If you are immediately next to or in a solid shelter when the bomb
goes off, stay there until the rescuers come to evacuate you to less
radioactive vistas.

If you aren’t already in a bomb shelter, but know a good shelter is
about five minutes away — maybe a large apartment building with a
basement that you can see a few blocks away — his calculations suggest
hoofing it over there quickly and staying in place.

But if the nice, thick-walled building would take about 15 minutes
travel time, it’s better to hole up in the flimsy shelter for awhile —
but you should probably leave for a better shelter after roughly an hour
(and maybe pick up some beers and sodas on the way: A study in the ’50s
found they taste fine after a blast).

This is because some of the most intense fallout radiation has subsided by then, though you still want to reduce your exposure.

Other fallout advice
One of the big advantages of the approach that this paper uses is
that, to decide on a strategy, evacuation officials need to consider
only the radiation levels near shelters and along evacuation routes —
the overall pattern of the radioactive death-cloud does not factor into
the models. This means decisions can be made quickly and without much
communication or central organisation (which may be spare in the minutes
and hours after a blast).

Other researchers have analysed other similar scenarios in papers, whose findings are summarised in the chart below: 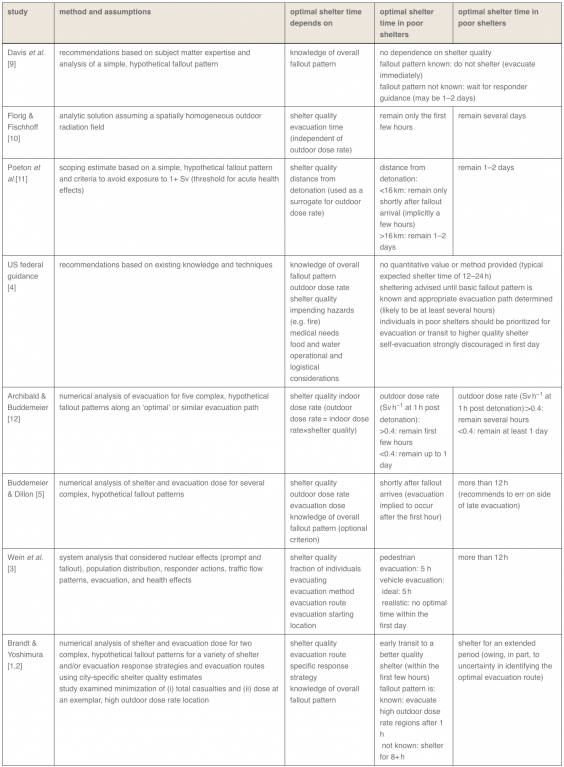 (M.B. Dillon/Proceedings of the Royal Society A: Mathematical and Physical Sciences)