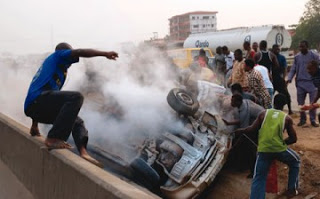 Two persons were feared dead in an early morning accident yesterday in Lagos State. The accident occurred around 3:00a.m. along Oshodi-Apapa Expressway.The accident involved a commercial bus, popularly known as Danfo, and a truck bearing gravel. The bus was carrying vegetable oil in jerry cans when the truck was said to have run into the Danfo.
The two drivers were seriously injured. The conductor and a passenger died on the spot, while the motor boys accompanying the truck were trapped inside the vehicles for about one hour before being rescued by emergency workers from the Lagos State Emergency Agency (LASEMA), Lagos State Fire Service and other agencies, which mobilised to the scene.

The accident caused a heavy traffic gridlock on the busy highway while policemen from Ilasa Police Divisional Headquarters, led by Titilayo Oriyomi and other emergency workers evacuated the deceased and injured, removed the damaged vehicles and controlled traffic.

While this was ongoing, another Danfo driver, who refused to obey the signal to reduce speed, summersaulted as it approached the scene. The driver equally rammed into a policeman and broke his leg.

In a related development, five members of a family were killed at the weekend when a Lexus Sports Utility Vehicle (SUV) collided with a motorcycle, along Nkwoedo market in Ekwusigo Local Council of Anambra State.

It was gathered that the deceased were heading towards Oraifite, when the driver of the vehicle, which was approaching from the opposite direction lost control and veered off its lane, killing the motorcyclist and his four passengers.

A witness, who said the victims belong to one family, said they died on the spot while the driver of the vehicle, who was carrying two persons quickly alighted and they all took to their heels, abandoning the car. He said the bodies had been deposited at a nearby hospital morgue.

Confirming the incident, the state Sector Commander of the Federal Road Safety Corps (FRSC), Sunday Ajayi, blamed the accident on overloading and traffic violation, describing it as unfortunate.