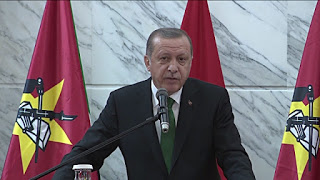 President Recep Tayyip Erdogan has said
Turkey`s interest in Africa was not materialistic, implying Ankara did
not aim to exploit the continent as others have in the past.
The Turkish president was in Mozambique on Tuesday evening as part of the second leg of his southeastern Africa tour.
“We know very well who exploited Africa,”
Erdogan said Tuesday evening at a Turkish-Mozambique business forum
with Filipe Nyusi, the country’s president.
The business forum was organized by the Turkish Foreign Economic Relations Board (DEIK) in the capital Maputo.
“We know what Africa went through in the
past, we know very well how they exploited Africa and we also know who
exploited. The history of Africa is actually our bleeding wound,” the
Turkish president said. “The delegation of businessmen accompanying me
in this visit is the most beautiful manifestation of the interest the
Turkish private sector has in Mozambique.”
“We are ready to share our experience […]
with our African brothers,” Erdogan said at a news conference with his
Mozambican counterpart Nyusi after a signing ceremony of six cooperation
agreements.
Erdogan arrived in Tanzania on Sunday for a two-day official visit, the first stop of his Southeast Africa tour.
“Our ancestors have never had a colonial
post in Africa in their millennial history,” Erdogan said in a speech at
the Turkish-Tanzanian business forum on Monday.
“Our ancestors, who established states
that spread across three continents have never acted with imperialist
purposes in other regions,” he added.
He also said that the interest of the Turkish people in Africa was “one of the heart and the mind”.
“The United Nations is not impartial at
the moment. The crisis is not over in the Middle East because [the UN]
is not fair and the Middle East is still bloodied. This has not stopped
in Africa either.
“These same troubles continue in Africa
as well. Has Africa not been exploited for years? Has Africa`s gold,
diamond, copper not been exploited and taken away?
“Didn`t they establish slave trade from
these [practices]? […] Did the West not remain silent? Did they not get
up and put their hands in our business? Did they say what’s happening?
No, they never said, ” the Turkish president said.
The Turkish president is currently in
Madagascar for the third and last leg of his southeastern Africa tour.
He will head back to Turkey on Thursday. COM
Previous Post