Authorities in Salt Lake city released footage on Monday from a federal courtroom that shows a U.S. marshal shooting dead a defendant as he attempted to attack a witness with a pen.

The footage from 2014 shows Tongan Crip Gang member Siale Angilau, 25, rising from a seat next to his attorney, and grabbing his lawyer’s pen.

He then dashes towards the witness and attempts to vault onto the stand, brandishing the pen. 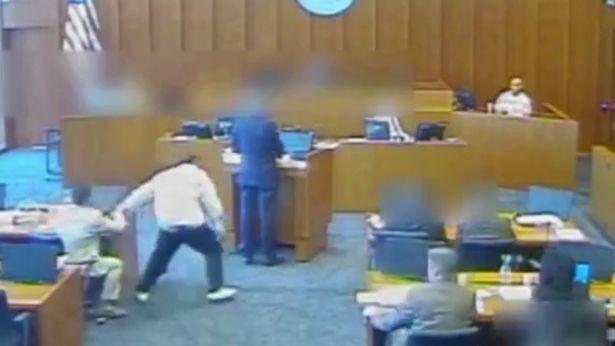 The witness jumps back as Angilau falls over the front of the witness stand. An oficer out of shot yells “drop the pen. Drop the pen out of your hand.”

A judge decided to release courtroom footage of the incident after a lawsuit from Angilau’s family was dismissed.

“The video completely contradicts the plaintiffs’ argument that Angilau stopped posing a danger within less than one second of launching himself over the witness stand while making a stabbing motion with a pen in his hand,” said District Judge John Dowdell.

“Angilau was in custody, but he essentially had escaped custodial control for those seconds during which he was executing his plan to assault the witness,” the judge wrote in a ruling obtained by Deseret News.

“His attack was stopped by the shots that Jane Doe rapidly fired, in less than one and one-half seconds.”

The family had argued that Angilau was armed only with a pen, and the four shots fired constituted an excessive use of force.

The U.S. marshal who fired the shots was cleared of any wrongdoing.

Angilau was one of 17 Tongan Crip members named in a 2010 indictment accused of assault, conspiracy, robbery and weapons offenses. He was the last of the defendants to stand trial, with other gang members having received prison sentences ranging from 10 to 30 years.