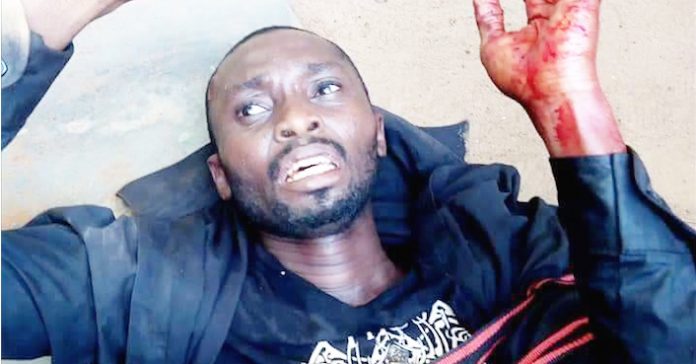 About 48 hours after two pupils of St. John’s Anglican Primary School in Agodo, Ogun waterside area of Ogun State were hacked to death, Police in the state, Wednesday arrested the suspected killer of the pupils, Lekan Adebisi.

It was gathered that youths and hunters in the community had launched a manhunt on Adebisi since Monday when he gruesomely murdered the pupils during their lunch break time.

Their efforts, it was gathered, paid off in the early hours of Wednesday when the youths reportedly sighted him while attempting to flee the community and chased him to a nearby bus where he was arrested.

A source connected with the arrest told our correspondent that the angry youths pounced on him and was nearly killed when one of them invited the police to the scene.

He was subsequently taken to the nearby police station where people of the community thronged the scene in droves to catch a glimpse of him before he was transported to the police headquarters in Eleweran, Abeokuta, the Ogun State capital.

The suspect broke into the compound of the school on Monday killing the duo of Mubarak Kalesowo and Sunday Obituyi who were four years old each.

Although the suspect was said to be mentally deranged, but a closer look at the bodies of the deceased showed that one of the hands was chopped off while the other’s chin skin was missing.

He said the suspect had to be shot before he was finally arrested as he was seen brandishing machete to prevent arrest and escape from the scene.

Oyeyemi who revealed that the suspect has been taken to a hospital for medical attention said the police had earlier engaged the service of local hunters to help the police in the search.

Oyeyemi said, “The suspect who murdered two school pupils at Agodo in Ogun waterside on Monday 12th of March 2018 has been arrested.

“He was arrested in the early hour of today by the combine efforts of the policeman attached to Ogbere area command led by ACP Makinde Kayode and the local hunters.

“The commissioner of police CP Ahmed Iliyasu who was so furious about the incident gave a marching order to the Area commander Ogbere and DPO Abigi Division to fish out the murderer within the shortest possible time.

“In compliance with the CP order, the area commander mobilised policemen and local hunters for the manhunt of the suspect. Their efforts paid off in the early hour of today when the suspect was seen in a bush around the community.

“While they wanted to arrest him, the suspect who was brandishing a sharp cutlass attacked them consequence upon which he was shot and injured on the leg. He has been taken to hospital for medical treatment.”

According to him, the commissioner of Police, Ahmed Iliyasu had directed that the case be transferred to homicide section of state criminal investigation and intelligence department for proper investigation.

‘Our maid’s nudes are on my husband phone’