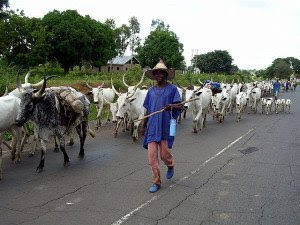 Following the raging feud between the Fulani herdsmen and farmers  in Nigeria, the Consulate General of the United State in Lagos has waded in with a view to finding lasting solution to the lingering crisis, especially in the South western region of the country.

The Consulate, in partnership with a Non-Governmental Organisation (NGO), The Strength in Diversity Development Centre took the first step in Lagos by arranging a meeting with the Sarkin Fulani of Lagos and Chairman, Association of Fulani Chiefs, South-west Nigeria, Alhaji Mohammed Bambado.

The meeting, which was hosted by Bambado in his palace in Surulere, Lagos focused on the current clashes between the Fulani Herdsmen and Farmers especially in the South-west of Nigeria.

The US team was led by the Economic and Political Chief at the Consulate office in Lagos, Mr. Thomas Hines and the Deputy Consul General, Mr. Jeffrey M. Willey and were accompanied by the Political Officer, Luckett Meghan.

The president and Co-Executive Director of the Strength in Diversity Development Centre, Imam Shefiu Abdul-Kareem Majemu, who facilitated the meeting, disclosed to the media that, the main aim of the parley was to “further facilitate a reconciliation meeting among the ethnic and warring groups with a view to bringing the current situation under total control.”

According to him, the team has promised to facilitate dialogue fora where the farmers and the Fulani Chiefs could meet from time to time to interact and discuss issues within themselves and thereby seek for amicable ways of settling dispute.

The team told Sarki the US commitment to working with relevant institutions to find urgent solution to the crisis in good time.

The host, Alhaji Bambado thanked his guests for their thoughtfulness about Nigeria and stated that any efforts geared towards dousing the tension the crisis is causing would be embraced by them..

He said his doors are open to whoever means well for the country.