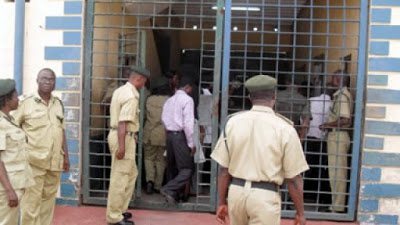 A 32-year-old security guard, Kenechukwu Okonkwo, was on Friday sentenced to 14 years imprisonment for raping a 29 year-old virgin.

Justice Oluwatoyin Ipaye while passing the sentence at an Ikeja High Court, Lagos, described rape as an `act of extreme violence’ against women.

Ipaye said that there should be zero tolerance to any form of violence against women and vulnerable members of the society.

“I hereby sentence you, Kenechukwu Okonkwo, to 14 years imprisonment to commence from today March 24, 2017,” she said.

The News Agency of Nigeria (NAN) reports that Okonkwo was arraigned in court on July 14, 2015 on a charge of rape which is contrary to Section 258 (1) of the Criminal Law of Lagos State 2011.

During the trial, the prosecution led by Adeniji said that Okonkwo committed the offence on Dec. 27, 2013 in his one-bedroomed apartment located in Ketu Lagos.

Adeniji said: “The complainant was a 29-year-old saleswoman (name withheld) who was a virgin.

“She became friends with Okonkwo who was a security guard working at a supermarket where she supplied goods.

“She was experiencing accommodation problems and was about to be evicted from her home.

“The complainant however, confided in Okonkwo about her problem and he offered to keep some of her property in his apartment.

“She came to inspect his apartment which was a ‘face me I face you,’ doubting the suitability of his apartment and when she turned to leave, Okonkwo blocked her exit and forcefully dragged her from the corridor into his apartment.

“She was screaming and begging him in Igbo language and he responded saying that ‘you have been suffering me for too long,” he said.

The prosecutor said the convict however, gagged her with wrapper to stifle her scream and had forceful carnal knowledge of her in his bedroom.

“The noise and commotion in the apartment attracted Okonkwo’s co-tenant who came to intervene to no avail.

“It was when the landlord knocked on Okonkwo’s door to enquire about the noise that the complainant was able to escape,” Adeniji said.
However Okonkwo, in his testimony during the trial, claimed that the sexual intercourse between him and the complainant was consensual.

He said that he had a desire to marry her and she usually visited him at his apartment on Sundays with members of her church.

“On that fateful day, I attended a naming ceremony and while I was leaving the ceremony, I received a phone call from the complainant saying that she was at my house.

“She changed into a pair of tights from her jeans trousers to make the Indomie and I played an adult movie which we watched together while we had dinner.

“She made me promise that I will marry her and thereafter, we made love,” he said.

However, when he was being cross-examined by Adeniji, Okonkwo admitted, contrary to his testimony, that the complainant visited him for the first time on the day of the incident.

Justice Ipaye, in convicting Okonkwo, noted inconsistencies in his testimony.

She said: “The defendant is not only economical with the truth, he should not be believed.

“There were inconsistencies in his testimonies and his longstanding friend who testified on his behalf as DW2, could not recall knowing her as his girlfriend.

“She was at risk of having her belongings thrown out of where she was staying and he took advantage of her vulnerable state on the night of Dec. 27, 2013.

“After hearing and observing the defendant and the complainant give their testimonies, her account is more in line with narration of her accommodation problem.

“Her visit to the defendant was not a social visit but to establish the suitability of his home to keep some of her belongings at the time.

“She is of a very slim build and could have been easily overpowered by the defendant and her account was more in line with the account of the medical doctors who testified on behalf of the prosecution,” Ipaye said.
NAN reports that four witnesses testified on behalf of the prosecution — the complainant, the investigating police officer and two medical doctors.

Noting the impact of the medical evidence on her conviction of Okonkwo for the crime, Ipaye said: “Penetration, however slight, constitutes the offence of rape.

“I have no doubt about the penile penetration, as the testimony of the complainant was clear, concise and unequivocal.

“PW3, Dr Oluwaseun Osungbusi, is a medical doctor with the Lagos University Teaching Hospital (LUTH). He came to testify on behalf of his colleague, Dr Justina Oyemarin, who attended to the complainant on the night of the alleged rape.

“He and Oyemarin both worked at the Ikosi Primary Health Centre where the complainant sought treatment after the alleged rape.

“Oyemarin’s report noted that the complainant had a broken hymen, had bruises on her body and had heavy vaginal bleeding and discharge.

“PW4 was Dr Joseph Onwoh, a medical doctor with over 30 years of experience in gynaecology.

“In his testimony, he told the court that when the complainant was referred to him, she was bleeding and had a ragged, broken hymen.

“He counselled her and advised her to keep her bloodstained underwear as evidence in case the matter goes to court.

“He can be seen as a first responder who saw the complainant in her state of distress and his testimony was in line with the test results presented by Osungbusi,” she said.

NAN reports that counsel to the convict, Mr Worer Obuagbaka, in his plea for mercy, told the court that Okonkwo was a first time offender and was repentant.

“The convict is a first time offender and the only son of his family; he lost his mother last year to cervical cancer and has been in custody since December 2013.

“During this period, he has learnt his lesson, I plead with the court to pass a light sentence on the convict and temper justice with mercy,” Obuagbaka said.

However, the prosecutor, Mr Kazeem Adeniji, the Lagos State Attorney-General and Commissioner for Justice, commended the judgment.