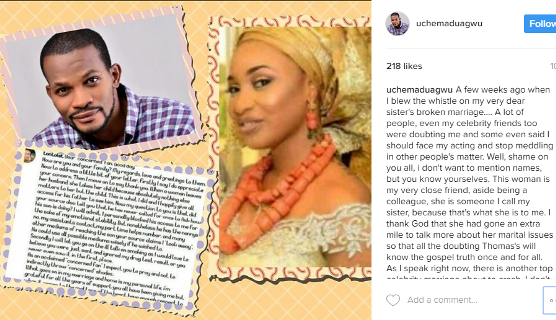 Actor, Uche Maduagwu has reacted to Tonto Dikeh’s confirmation that her
marriage has crashed. He claimed he broke the news but people didn’t
believe while others called him out. He is also claiming that another
celebrity marriage is about to end. According to him…

“A
few weeks ago when I blew the whistle on my very dear sister’s broken
marriage…. A lot of people, even my celebrity friends too were
doubting me and some even said I should face my acting and stop meddling
in other people’s matter. Well, shame on you alI, i don’t want to
mention names, but you know yourselves. This woman is my very close
friend, aside being a colleague, she is someone I call my sister,
because that’s what she is to me. I thank God that she had gone an extra
mile to talk more about her marital issues so that all the doubting
Thomas’s will know the gospel truth once and for all. As I speak right
now, there is another top celebrity marriage about to crash, I don’t
want to mention the name of the actress involved, but within a few days
or more, you all will hear the news…. To hint more on this, the
actress whose marriage is boiling right now is also a good friend of
mine, but we are not that close sha, as a matter of fact, I just
finished talking with her and consoling her on the phone right now, she
is in a very bad state now, she is just crying profusely, broken and
helpless. I guess not all that glitters are gold after all. Here is an
advice to all my female fans out there both in Nigeria and South Africa,
please I beg you in the name of God, do not allow anyone pressurize you
into getting married to someone who had broken the hearts of so many
innocent women in the past, even if you must marry a man who has had a
kid or two before, I suggest you do your investigations well, some men
are not what they claim to be oh, forget about all the gifts, money,
pampering and sweet words, “all na scope oh”! The very moment you fall
for them, that’s it, “you don enter one chance my sister”. Be wise, be
patient, don’t rush God, when the time is right, He will provide your
prince charming, my dear, don’t look at your age, age is just but
numbers dear.”