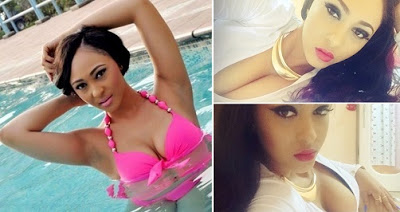 Alleged Home breaker, Rosaline Meurer has just revealed that she was attacked yesterday in Lagos by an unknown man on her way to a movie premiere.

According to her, she was attacked and “bashed” by the man who apparently, was eventually arrested by the police. “Thank God for the Nigerian police that intervened,” she said.

See below and some comments from Nigerians. 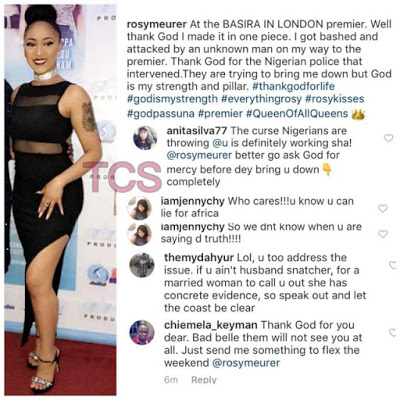 Recall that Rosaline Meurer was called out as the mistress allegedly dating Olakunle Churchill leading to the breakdown of Tonto Dikeh’s marriage that was barely 2-years-old. In an earlier interview, Meurer swore she had never had an affair with Olakunle Churchill because she considers Churchill as a ‘brother’ who has a ‘good heart’.

However, Tonto Dikeh pointedly called her out and claimed she had the photos of Churchill and the actress.

“I do know their story. I know that they are in love. My husband bought the SUV she was showing off,” she continued.

“I have pictures of them on a trip abroad together. That’s what my husband has never done for me, or his family. Where this hurts is that I watched my husband make every dime he owns. I know the sacrifices I made for my family. All I ask is that he be good with his family.

“I practically dragged someone off my husband’s private part before. I forgive them, with all my heart,” she said.

After that viral interview, Meurer received vicious attack on social media, with many people threatening to harm her if they ever found her on the streets.

It is unclear if the Lagos attack is connected to the Tonto Dikeh marital saga, but Meurer seemed to hint on this.

“They are trying to being me down but God is my strength and pillar,” she said yesterday.

We can’t wait for updates.