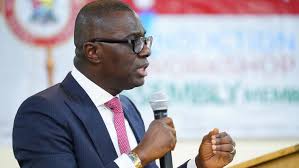 As we commemorate another anniversary of civil rule in Nigeria, I have been inundated by thoughts of what tomorrow holds for Nigeria and Nigerians. The travails of our present times are daunting. Very daunting indeed. The truth is, our country is at war. We have been fighting enemies, seen and unseen. We began with the seen. They could be fought with tanks and bullets. Then, the unseen enemy crept in upon us. It crept in cladded in the camouflage of some deadly mutating virus.

It soon grew into a marauding enemy, leaving sorrow,tears, death, dearth; and debt behind. Its footprints are a battered economy and a perplexed nation. It displaced many from the comfort of their homes and made the Isolation Centres the equivalent of IDP camps for many. The unseen enemy took prisoners of war just like its counterpart in the realms of the seen. This enemy hoisted flags of mourning at the doorposts of many families in a manner similar to the acts of the insurgents. This was to be fronted with the weapons of medicine and research. But as a people, we stood up to it.

Here in Lagos, we raised an army of our very best and brightest from the field of medicine to the frontlines. When we mustered our troops for the battle against the dreaded Covid-19, we remembered the gallantry of our ancestors and the strength of their character in the fierce battle against a similar enemy called the 1918 Influenza. In those days, even the living could not bury their dead. Medical doctors were few and our people did not have the benefit of the advancement in medical science as we do today.

But there was something about their spirit the influenza did not know. They were Nigerians! They defeated the marauding enemy on this very soil. When I became the Incident Commander, we resolved that we could defeat Covid-19, just as our forebears did the influenza on this very land. The jury is still out today documenting how we are reining in this unseen enemy in Lagos.

But there is a role our collective national character as a people played in the successes we have recorded. If we speak of how we are defeating this virus today and we fail to take into account the place of the Nigerian Spirit, then we would have missed the point. This is what has left the global medical community in consternation. We are Nigerians! Invincibility is etched in our character. We are a people of distinction. I write today not to speak to our heads, but to speak to our hearts. I stand in the place of hope. I see tomorrow through the prism of hope, in spite of all of our challenges.

We are the most populous black nation in the world. We are a country of more than 200 million people from over 250 ethnic groups, staying together as one nation.We are a wonder to the world. Ours is a land where people speak more than 520 languages to one another,and still live together in understanding. We are the unity in diversity that makes the world interesting. We are a people of hope. Our greatness is guaranteed by the brightness of the tomorrow ahead of us.

Lest we forget, we have remained Africa’s largest market that cannot be ignored by the world because of our indomitable spirit! Never must we cease to believe in ourselves because of the decision of one business notto site its operations in Nigeria. Let us remember this great land gave birth to the great Oliver De Coque, Osita Osadebe, Mama Comfort Omoge, Dan Maraya Jos and Fela Anikulapo. We are that country that gave the world King Sunny, Chief Ebenezer Obey and Fela Kuti.

Today offers me an auspicious occasion to remind us that we are still that great nation that gave the world the rare gifts of Femi Kuti, Tuface Idibia, Burna Boy, Wizkid, Davido, Olamide, Asa, Teni, Flavour, Phyno,Omah Lay, Joeboy, Fireboy, Mi Abaga, Ali Baba and a generation of other young musicians, who now rule the world of music and entertainment. We are a people of strength. Our spirit lives in Kelechi Iheanacho, Wilfred Ndidi, Samuel Chukwueze, Ahmed Musa, Asisat Oshoala, Israel Adesanya, Kamaru Usman, Anthony Joshua and others.

Space will fail me to name all of them. They are our constellation of stars, shinning to the world from this very land or the places of their sojourn. Shall I forget the Ikorodu Bois who I met recently? They are a marvel to the global entertainment world. Just by the sheer force of their spirits, they have turned adversity to advantage. Such is the potential of our youths, their amazing creativity and remarkable energy, which can propel our nation to that greatness we all crave.

From Dogondaji in South West of Sokoto, we gaveJelani Aliyu, one of the world’s acclaimed automobile designers, to General Motors. He went ahead to give the world Chevrolet Electric Volt, different brands of Opel cars and Pontiac G6. We are the people of that land that gave the world that genius of a surgeon, Dr. Oluyinka Olutoye, who delivered a baby twice at 23 and 36 weeks in a Texas hospital when the expectant motherhad been told to terminate the pregnancy.

It is a testament to the resilience of the Nigerian Spirit and an innate grace to defy all the odds, a young lady from Kano State, Amal Hassan established Outsource Global, which is the first International Contact Centre and Business Process Outsourcing (BPO) Company in Nigeria, employing more than 850 people. Today, she has made Nigeria a global outsourcing destination. Each time they tell you that Nigerian youths are allfraudsters, tell them about Amal Hassan.

If we tap into our inner resilience to endure this present storm, Nigeria will become the 3rd most populous nation on earth, with a population in excess of 400 million people when the global population hits 9.8billion by 2050, according to the United Nations Department of Economic and Social Affairs forecast.

The world already knows this fact. This is not just a populations figure. If we stay together, if we defy the odds, the world sees it as an amazing market. The world sees it as a growth opportunity. It is because we have persevered together as one people, in spite of our differences, that some International media networks have described Nigeria as an “economic powerhouse”.

I am confident about one thing; if we tap into the invincibility of our national character, a new Nigeria will be born in our own time. The travails of our today are the birth pangs of a new Nigeria, coming forth from the womb of time. I can hear the cry from the labour room of history, a new Nigeria is about to be born.

Let’s stay in the fight. Let’s stay resilient in battle. We are an invincible people. We shall prevail.