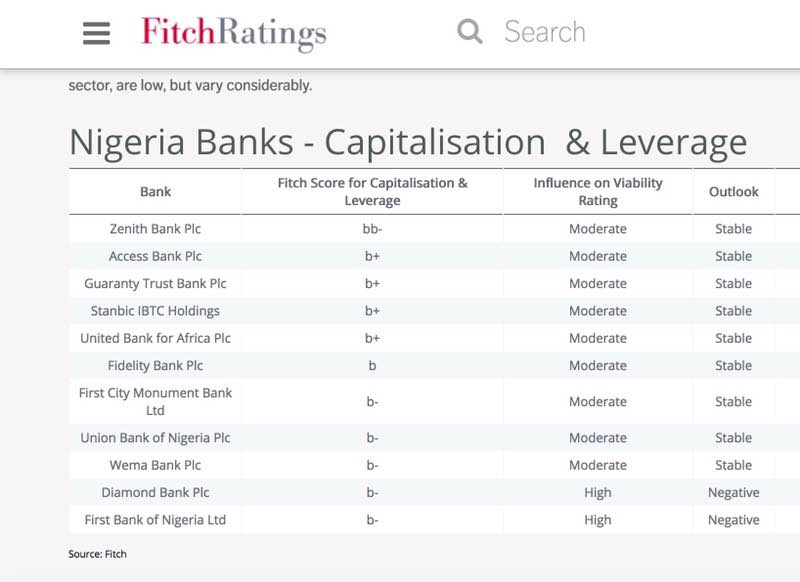 The stress test conducted by the Central Bank of Nigeria (CBN) has confirmed the resilience of large banks to withstand stresses over smaller banks, even as it singled out Zenith Bank Plc for its strength in comparison to others.

The rating agency said in its analysis of the CBN report: “… medium and large banks collectively could withstand a 100% increase in non-performing loans (NPLs) but small banks (assets less than NGN500 billion) would struggle to withstand even modest NPL deterioration.

“In our own assessment of the banks we rate, which are mostly large (assets more than NGN1 trillion), capacity to absorb losses through capital varies considerably.

“Zenith Bank Plc is stronger than the rest, while capital weaknesses at First Bank National and Diamond Bank have a significant influence on their ratings,” it added.

“All Nigerian bank ratings are in the highly speculative ‘B’ range, but even so capitalisation is an important differentiator. The scores we assign, based on capitalisation and leverage metrics across the sector, are low, but vary considerably,” the agency explained.

The apex bank’s stress test focused on the ability of banks’ capital adequacy ratios to withstand a number of impairments arising from Non-Performing Loans and Fitch noted in its analysis that small banks were particularly badly hit in the stress tests.

“They already had very weak starting capital positions, with an average capital adequacy ratio (CAR) of just 3.14% at end-2016, following sharp falls in 2016 due to rises in NPLs. Medium and large banks had stronger starting positions, with CARs of 12.75% and 15.47%, respectively, at end-2016,” the agency stated.

“Reported NPL ratios do not tell the whole asset quality story. Restructuring, particularly of loans extended to the troubled upstream oil sector, is fairly common practice in Nigeria, and restructured loans at some rated banks account for as much as 20% of total loans,” it added.

It further noted that there was good ground to belief that that capital buffers at banks may be weaker than reported ratios suggest.

“These are one-off gains but they have been realised and provide a strong boost to capital, which is positive, especially in light of weak asset quality,” it said.

The CAR is the ratio of bank’s assets to its risks. It is placed at 10 per cent for national banks and 15 per cent for banks with international subsidiaries and 16 per cent for Systematically Important Banks (SIBs).

OPINION: SARAKI’S REFORMATION CAMPAIGN AND THE FUTURE OF LEGISLATION IN NIGERIA