OPINION: SARAKI’S REFORMATION CAMPAIGN AND THE FUTURE OF LEGISLATION IN NIGERIA 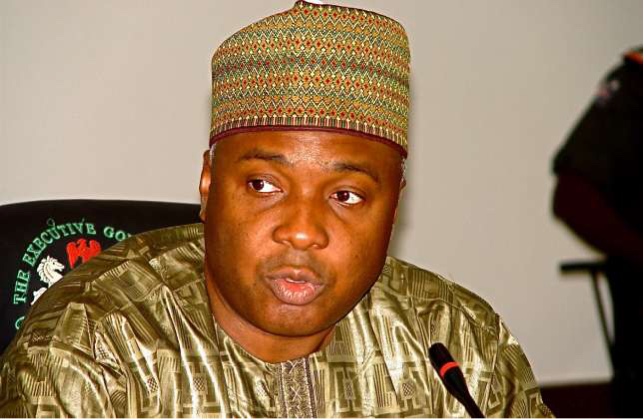 Sequel to the Part 1 of this article published on the 19th of March, 2016 It has become imperative to update the previous achievements of the Saraki led 8th Senate as they are overtaken by events and set the record straight.

At the beginning of this current administration, most if not all agreed that a major precondition for economy buoyancy and building stronger institutions lies in the cooperation among the three arms of government.

In the build up to this regime’s inauguration, special emphasis was laid on the Legislature and Executive relationship, with the former being the symbol of Nigeria’s democracy.

No doubt, the Legislature must succeed if the Executive hopes to deliver on the dividends of democracy in the shortest possible time. Since one arm cannot function effectively without the other, it is important for both arms of government to set their focus on people’s oriented programmes and avoid divisive elements heating up the polity due to their ignorance of the principles of separation of powers.

Unknown to them that when the Senate delivers on its Legislative agenda, it eases diversification of the economy and sets a working precedence for the Executive to succeed as well. And thus raises confidence and gives people the opportunity to participate and contribute their quota to good governance.

To reap is to bear the fatigue of labour, and from all indications, the National Assembly, on account of its activities on recent legislation is moving in the right direction.

However, we should be mindful that the upper chamber comprises of Lawmakers with divergent constituency priorities and ideologies, hence, the general public will sometimes be pitched with their representatives on account of the Bills and MOTION they sponsor and move.

Such Bills may be ill-digested ab initio and attract criticism in the court of public opinion. Unfortunately so, but inevitable.

The combination of activities within the Senate Chamber suggests the presence of a new order with new sets of rules centred on economy buoyancy and a focused oversight backed with discipline as an important ingredient in the successes recorded thus far.

Unlike what was obtained in the past, the Nation’s Legislative hub has shifted from a ‘rubber stamp’ Senate and is well-regarded, with a constant message of warning that resonates across government agencies, public and private enterprise that the 8th Senate under the leadership of Bukola Saraki is for re-establishment, rule of law and advocacy for the common man.

In spite of the perception of the country as one grappled with a combination of obstacles ranging from Insecurity, Terrorism, Corruption, Judicial manipulations and human rights violation, the National Assembly has been able to prioritize economic bills, people oriented MOTIONs & oversight; and when necessary, summon government agencies and institutions to account for one or more anti-people policies.

It is perfectly in order to be astounded by how the Senate President, Bukola Saraki has keyed into several important Legislative activities almost effortlessly, leaving one to imagine, the successes that could be recorded with such collective determination in the long run.

In the list of this reformation campaign and the impact on future Legislation is the first worthy news that the 8th Senate has proposed a #30bills for debate in 2016. A deviation from the norms in the 7th Senate where 46 Bills were hurriedly passed under 1hour.

Focus is important, and bills submitted earlier are subjected to thorough screening before passage. When passed, the bills are expected to give the much-anticipated reforms in key areas like Judiciary, Anti-corruption, Poverty Alleviation, Security, Education and Electoral Act. Having members of the public partake in the Bill debate via public hearing has also given credence to the entire process.

In the 8th Senate overall Legislative achievements, so far, 33 Senate Bills have been passed, 68 Bills due for Second Reading while 227 Bills have been introduced at First Reading Stage.

Since September 2016, about 56 Bills have been introduced already with 145 Bills due for Second Reading and 118 Bills currently at Committee stage awaiting further Legislative action.

With the Senate set to receive the final report on the PIGB Bill; the much talked about PIB Bill is expected to regulate and form the fulcrum of templates for the downstream sector.

The recently passed Diaspora Commission Bill by the Senate has received wide commendations. Nigerians in Diaspora often referred to as “the scattered seed” expressed delight that the Bill has finally been passed by the Senate after it failed several times in the previous Assemblies.

Also, the amendment to some of the INEC Electoral Act 2010, has been widely applauded as a major step in filling the vacuum in the previous electoral Act and promoting good governance.

The amendment includes provision for the use of electronic voting by INEC during future elections via use of Card Reader.

The new Bill also bequeath on INEC the power to modify the voting process if the need arises. This will also enable INEC transmit the result of elections electronically in an encrypted and secure manner to prevent manipulations.

Political parties now have the sole power to adopt direct or indirect primaries in choosing their representatives without external interferences.

In the areas of Oversight, the 8th Senate has also done remarkably well, recall the Media debacle that trailed the Senate’s decision to investigate the process, costs and terms of operation, especially the mode of the Treasury Single Account (TSA) e-collection and the humongous charges drawn as commission at the expense of taxpayers’.

Through Senate’s oversight in the face of blackmail and intimidation, a whopping N7billion was saved from different accounts of the MDAs, which could easily have gone into the wrong pockets.

The full report of Senate Committee findings exposed the sharp practices in connivance with government agencies to defraud the government of funds that can be used to develop other sectors of the economy.

The implementation of the report has further saved the nation from wastage and ensure prudence in spending public funds.

In a similar development, we have witnessed the Senate’s suspension of data price increase by NCC, abolished fixed charges on electricity and bulk metering by NERC and most recently the stoppage of Custom’s duty payment on old vehicles.

Austere times deserves austere measures, the announcement by Bukola Saraki to amend the procurement act shortly after the bill passage has received some considerate support, the inability to provide alternatives to imported goods is a huge collateral damage threatening to kill our manufacturing industry. Saraki revealed that ‘’the Act will be amended to ensure that made in Nigeria goods are patronised,’’

In this regard, the Senate has taken the lead role via the Made in Nigeria initiative. In taking the advocacy further, Aba traders were invited to display their locally made products. It is noteworthy, that the Senate President has agreed to continue to protect local industries through appropriate Legislation, patronage and direct intervention. This Olive branch has also been extended to Nigerians whose local produce/inventions can serve as an alternative to the imported goods.

Another important piece of legislation is the bill to amend the Agricultural lending scheme. If we agree that Nigeria is mono-economy in nature, then it is pleasant news for farmers that the bill has finally been passed.

Initiatives such as this shouldn’t be overlooked in the quest for youth employment and economic diversification.

Speaking on the passage of the Bill, Senate President, Bukola Saraki said it will ensure that farmers have access to funds at a competitive interest rate.

Saraki said; ‘’In order to meet long-term financial commitments to our farmers, we need to ensure that we protect the credit financiers and banks that are involved in credit disbursement, doing this will ensure that all Stakeholders meet their financial obligations,’’ he concluded.

The Senate’s approach to the 2017 Budget is unprecedented. The Senate Appropriation Committee members were determined to ensure that over-bloated figures allotted to some MDAs and other government parastatals Budget were expunged.

A joint public hearing was organised by the appropriation committee of both chamber and it afforded civil society groups and concerned citizens an opportunity to be a part of the #2017budget process.
This is a deviation from the previous cash-for-budget ‘’deals’’ brokered to impale the economy.

The successful budget defence process has shown that through oversight, the Senate can compliment the Executive in the fight against corruption.

So far, the 8th Senate has demonstrated a sheer resilience to leave an indelible mark by correcting the ills within the system.

Strong institutions are built by a working economy, the Senate realises the importance of creating an enabling environment for businesses to thrive, thus prioritising the amendment of important laws that will ease private sector participation in order to turn around the fortunes of the economy.

The 8th Senate can be said to have gotten its priorities right on account of this recent oversight that will shape future narratives as far as legislations were concerned.

The implications of these are numerous; it is indeed a move that advances a course of action capable of further stimulating the economy and spurring investor’s confidence in doing business in Nigeria the right way.

Wale Bakare is a writer and a social media enthusiast with strong affection for agriculture, politics and the conservation of the environment.