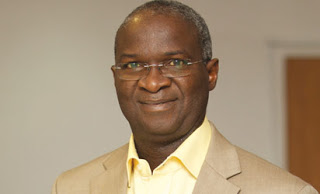 With work rapidly progressing on the rehabilitation, reconstruction and expansion of the Lagos-Ibadan Expressway, acknowledgments of its benefits in terms of shorter travel times and better journey experiences and appreciation from road users have started coming the way of the Federal Government.

In a recent commendation letter, the Ibadan Distribution Company (IBEDC) expressed delight and gratitude to the Hon. Minister of Power, Works and Housing, Mr Babatunde Fashola SAN for the rehabilitation work being carried out on the road saying it had not only eased accessibility to the company’s franchise majority of whom, it said, could only be achieved through the road, but had also made it possible for most of its staff to enjoy shorter travel times and better journey experiences as they visit their families at weekends.

The commendation letter signed by the Managing Director of the Company, Mr. John Donnachie, also noted that the exigencies of the company’s business demanded that a number of official trips were often undertaken via the expressway which it described as one of the busiest within the country.

The letter read in part, “The entire Management and staff of the Ibadan Electricity Distribution Company Plc (IBEDC) write to recognize and acknowledge the herculean task being undertaken by the Office of the Minister of Power, Works & Housing in the on-going rehabilitation work on the Lagos-Ibadan Expressway.

“Our commendation and gratitude for the good work which your office is undertaking on behalf of the entire citizens of Nigeria cannot be expressed enough. As you are aware, the large portion of the franchise area of IBEDC can only be accessed through this road and many of our staff had in the past undertaken the arduous task of plying this expressway in order to spend time with their families and friends over the weekend. The exigencies of our business also demands that a number of official trips are undertaken via this route which one could rightly classify as one of the busiest expressways within Nigeria”.

Acknowledging that the repair works initially posed some challenges to road users, the company noted with delight that as the repair work nears completion, “the previous hardship, wear-and-tear on commuters and vehicles has been greatly reduced in addition to the millions of lives and money that have been saved as a consequence of this much needed rehabilitation”.

Expressing its “support and gratitude for a job well done”, the company declared, “There is no doubt that this project on completion, will boost commercial activities and the quality of life to the inhabitants primarily of Lagos and Ibadan with significant gains recorded by all other road users from other states and neighbouring countries”.

It would be recalled that recently while inspecting the on going reconstruction and rehabilitation work on the Lagos-Ibadan Expressway as part of his inspection tour of  Federal Highways and other projects in the South West Zone, Fashola had alluded to the fact that reports of shorter travel times and better journey experiences had been coming in as commuters testified to making the journey from Ibadan to Lagos in less than two hours even as the project was still on-going.