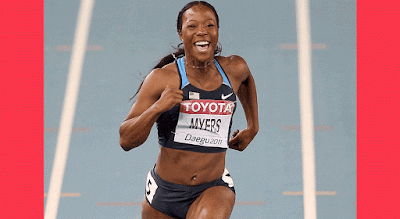 An American Olympic track star, Marshevet Hooker, may
now be working as an exotic dancer.

According to multiple reports, one
of the dancers at Club Cabaret in Greensboro, NC (where Mashavet lives)
bears an uncanny resemblance to the Olympic star.

Marshevet participated in the 2008 Summer Olympics at Beijing, China,
finishing 5th in the 200 metres. In the 100 meters, Hooker became the
fifth-fastest woman up to that point (under any conditions) when she ran
a wind-aided 10.76 (+3.4) to win the first heat of the 100m
quarterfinals at the 2008 Olympic Trials.

Not really certain it is her, but you can be the judge.