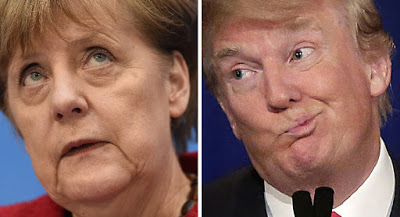 President Trump spent another pre-golf Saturday morning sending
tweets from his country club to set the record straight about his epic
Friday failures.


In his latest weekend Twitter rant, Trump managed to lash out at the
press, passive-aggressively attack German Chancellor Angela Merkel, and
remind the world that America spends more on their military than any
other nation on earth.

Despite what you have heard from the FAKE NEWS, I had a GREAT meeting with German Chancellor Angela Merkel. Nevertheless, Germany owes…..

…vast sums of money to NATO & the United States must be paid more for the powerful, and very expensive, defense it provides to Germany!

On Friday, most mainstream media outlets reported on the obvious
tension between the two when they met and held a press conference at the
White House.

At one point, President Trump refused to shake Merkel’s hand after she offered in front of a room filled with photographers and reporters.

However, that might not have even been the most awkward and uncomfortable part of the day.

Trump joked that both he and Merkel had been wiretapped by then President Obama,
referring to his recent unfounded allegations that the former president
had wiretapped Trump Tower, and a 2014 report that the Obama
Administration had been monitoring Merkel’s cellphone calls.

Throughout their joint press conference, Merkel took turns looking shocked and horrified by some of Trump’s comments.

The President then went on to refer to a reporter asking questions about his wiretapping claims as “fake news.”

In his tweets this morning, Trump managed to also remind the world that Germany has not paid enough to NATO.

He has often criticized other nations not spending 2% of their GDP on
defense, per an agreement between NATO countries, and even stated that he would have to think twice about coming to the aid of a fellow NATO member if they had not spent their required amount.

If this pattern seems familiar, it is because it is.

Last week, President Trump kicked off his weekend golfing outing at
Mar-a-Lago by tweeting the accusation that President Obama had “wire
tapped” Trump Tower, after claiming he found out about it while watching
FOX News.