According to a report on Daily Post, about 21 people have been
allegedly killed in two different attacks in Kaura and Jema’a local
government areas of Kaduna State. 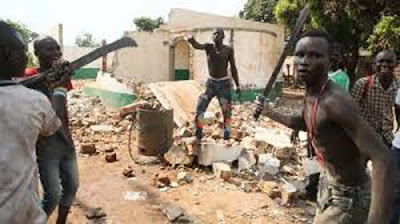 At about 6am, today, Monday, the
attack was carried out by suspected Fulani herdsmen at Mifi and Ashim
towns in Attakar Chiefdom of Kaura local government area, leaving no
less than 14 local farmers killed.

‎The
report stated that two security agents were also killed in the attack in
Bakin Kogi in Jema’a LGA, which was said to have been carried out by
suspected Fulani herdsmen on Sunday.

The Chairman of Kaura local
government area of Kaduna State, Mr. Alex Iya, confirmed that 14 people
were killed in two communities of Mifi and Ashim by gunmen suspected to
be herdsmen.
The lawmaker representing Kaura constituency at the
Kaduna State House of Assembly, Dr. Yakubu Bityong, also confirmed the
incidents.

He said that the attackers had killed and destroyed many homes before the arrival of the security operatives.

The
Chairman of Jema’a local government area, Hon Bege Katuka Hunble could
not be reached but the Secretary of Tum Nikyop, Kaninkong Chiefdom,
Lucky Jacob confirmed that 8 people, including two police men were
killed, while several houses were destroyed in the Bakin Kogi attack.
The police in Kaduna is yet to issue an official statement concerning the attacks.