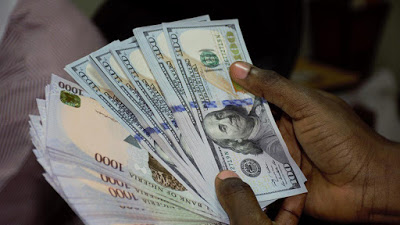 Air passengers were thrown into confusion at the weekend when Bureau
de Change (BDC) outlets at international airports nationwide declared
foreign exchange, especially dollar, out of stock, according to TheGuardian.

Notable BDCs like Travelex, Sulah, Bossy Clean Exchange and Ibro
Resources that had often sold at about N400 to a dollar, all declared
“no dollar” to all outbound passengers.

Intending passengers travelling on business trips were forced to
devise alternative means to go on with their travel plans or simply
returned home after loitering around the unyielding BDCs.

Travel agents, who blamed the BDCs for hoarding, were worried about the
development, describing it as “killing” to the air travel business and
loss of revenue to parties concerned.
A visit to the Murtala Muhammed International Airport (MMIA), Lagos,
yesterday revealed that though the BDCs were open to customers, none of
them was ready to sell. Electronic boards indicated “we buy N398 to $1”
and “sell for N400 to $1.” Except for Travelex that boldly pasted:
“Sorry, we are out of stock”, others merely turned back travellers with
“no dollar” response.

An official of Sulah BDC told The Guardian that they had no dollar to sell because “people have failed to sell to us.”

A Dubai-bound passenger, Elizabeth, said the BDCs had often been the
most reliable source for travellers to get dollar and at comparatively
good rate, but was surprised to find them with no stock since last week.

She said: “I’ve been searching for a dollar equivalent of just N4
million since last week. I was actually prepared to travel only to find
that there was no dollar anywhere. Ordinarily, Travelex would still have
given $1000 if you can prove that you are travelling and go on to buy
from others at higher rates. This time, none of them wanted to sell a
cent. It is so pathetic.”

Meanwhile, on the streets and outside the airport, mobile BDCs
otherwise called mallams were selling in trickles of $100 at N510 to
N550.

Eniola Adesanya, who is bound for United States, had to do “trade by
barter” with some overseas-based family members planning to send some
money to their relatives in Nigeria.
Adesanya told The Guardian that the method was her saving grace. “I
had to start calling them to ask if they plan to send money to Nigeria.
It is like giving them a loan, which I have paid to their relatives
here. So, they will give me a refund in dollar in the United States.

“It was through the same means that I bought a ticket from the U.S.
There is no dollar here and the airline is not accepting naira for
purchase. My method is funny, but otherwise I would still not be able to
travel, as the visa will soon expire. It is so crazy around here. May
God have mercy,” she said.
The President of the National Association of Nigerian Travel Agencies
(NANTA), Bernard Bankole, blamed the situation on artificial scarcity
that should not have happened in an ideal setting.

According to Bankole, “There is no reason for this scarcity because
the official rate has not moved and the rate we get tickets has not gone
up either. The official rate is still at N305 or N306 and the black
market is doing at N520 to N525. But the round tripping has increased.
So, people are envisaging that there may be devaluation so that they can
make more money. That is the unfortunate situation.

“The Central Bank of Nigeria (CBN) is holding the country to ransom,
and it is a shame. I believe if they have lost how to manage their forex
policy, they should just resign and go away, rather than put the whole
nation to shame. Because that is exactly what we are seeing now,” he
said.