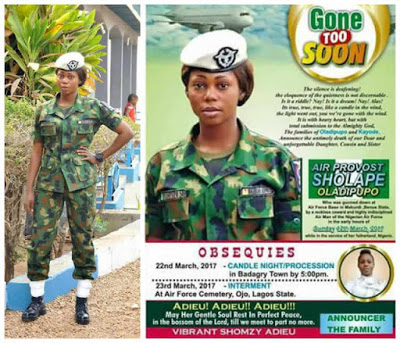 Beautiful Nigerian Airforce officer, Oladipupo Solape popularly known as ‘Shomzy’, who was shot to death by a colleague and lover, would be laid to rest in Badagry.

Late Shomzy Oladipupo was killed by boyfriend, Lieut Kalu on Sunday, March 12 while serving Nigeria at the Airforce Base in Makurdi, Benue state capital.

There will be a candle night/procession in Badagry Town, Lagos by 5 pm in her honour on Wednesday, March 22 while her internment, is set to hold on Thursday, March 23, at the Air Force Cemetery, Ojo, Lagos.

However, following her obituary poster, the Nigerian Armed-Forces have come out to pen down their condolence message saying:

“The silence is deafening!

The eloquence of the quietness is not discernible,

Is it a riddle? Nay!

It is true, true, true like a candle in the wind.

The light went out, you’ve gone with the wind.

Oh Shomzy, You Gone Too Soon!

The Nigerian Armed-Forces As A Whole Miss You