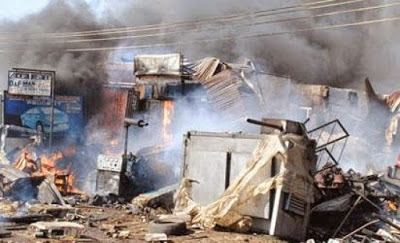 A total of eight people including five suicide bombers have been
killed in multiple explosions in Maiduguri, the Borno State capital.

A series of bomb blasts occurred in three locations around Muna
Garage area of Maiduguri metropolis. The incidents occurred at about 4
a.m.

The first location is Muna Kumbori, an unofficial host community camp
housing 199 internally displaced persons attacked by three suicide
bombers which led to the death of two other people.

The second location is Muna Dagalti which was attacked by a suicide bomber, killing the bomber and another person.

The third location is Muna Bulaya attacked by a suicide bomber who was the only causality.

A total of five suicide bombers, all male adults, were involved in
the incidents killing three innocent persons, bringing the total deaths
to eight.

At least 20 people with various degrees of injuries were administered
with first aid by emergency response teams and transported to the state
specialist hospital while the remains of the dead have been deposited
in the mortuary.

Suicide attacks are some of the tactics used by the terror group,
Boko Haram, whose insurgency since 2009 has caused the death of about
100,000 people.