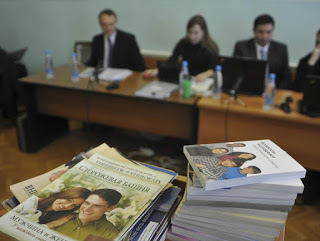 Russia has banned Jehovah’s Witnesses after the Supreme Court ruled the Christian sect to be an “extremist” group.

“The Supreme Court has ruled to sustain the claim of Russia’s ministry of justice and deem the ‘Administrative Centre of Jehovah’s Witnesses in Russia’ organisation extremist, eliminate it and ban its activity in Russia,” said judge Yuri Ivanenko.

“The property of the Jehovah’s Witnesses organization is to be confiscated to the state revenue.”

Lawyers for the group said they would appeal the court’s decision, which has not yet come into effect, and could take the case to the European Court of Human Rights.

The ministry of justice had previously applied for an order to shut down its national headquarters near St Petersburg, state media reported.

Its administrative centre, which has 175,000 members, had previously been suspended in March over alleged “extremist activity”.

Jehovah’s Witnesses, who are known for door-to-door preaching and handing out literature, reject some of mainstream Christianity’s core beliefs and have more than 8.3 million members around the world.