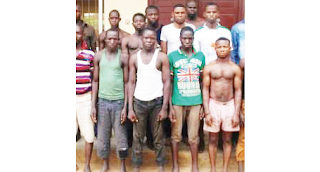 An Ilorin Magistrate Court has remanded four suspected cultists over their alleged involvement in the recent spate of cult killings in the Kwara State capital.

About eight people were feared to have been killed during the deadly clash that gripped Ilorin metropolis for about four days. The incident, believed to be among rival cult groups, spread to areas like Egbejil, Ita-Ogunbo, Oyun, Ikokoro, Osere, Olunlade, Niger, Kilanko and Olufadi and created panic among residents.
Most of the killings, except two were said to have been carried out in broad daylight.  In most of the killings, residents said the assailants closed on their targets shooting them at close range and in some cases also inflicted machete cuts on them.
The accused were charged  before the court for criminal conspiracy, being members of secret cult and unlawful possession of firearms contrary to section 97 of Penal Code law, section 2 and punishable under section 14 of secret cult and secret societies (Prohibition) and section 28 (1) of firearm act Cap 146 law of Nigeria.
According to the First Information Report (FIR) on the case the accused were arrested by the Criminal Investigation and Intelligent Department (CID) following a hint from well-meaning residents of the state.