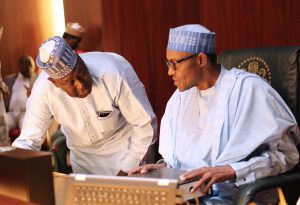 The federal government of Nigeria has replaced the controversial Secretary to the Government of the Federation (SGF), Babachir Lawal and Chairman of the Nigeria Intelligence Agency, Ambassador Ayo Oke with Dr. Habibat Lawan and Amb. Arab Yadam in acting capacities respectively.

It is understood that Lawal was reportedly suspended, because Buhari is perceived to be losing his fight against corruption, with some of his key appointees facing allegations from several quarters.

Osinbajo also told him pointedly that the outcome of the investigation will determine his fate.

Recall that statement signed by Buhari’s Special Adviser on Media and Publicity, Femi Adesina had announced the suspension of the SGF.

The statement reads: “President Muhammadu Buhari has ordered an investigation into the allegations of violations of law and due process made against the Secretary to the Government of the Federation (SGF), Mr David Babachir Lawal, in the award of contracts under the Presidential Initiative on the North East (PINE).

“The President has also directed the suspension of the SGF from office pending the outcome of the investigations.

“In a related development, the President has ordered a full scale investigation into the discovery of large amounts of foreign and local currencies by the Economic and Financial Crimes Commission (EFCC) in a residential apartment at Osborne Towers, Ikoyi, Lagos, over which the National Intelligence Agency (NIA) has made a claim.

“The investigation is also to enquire into the circumstances in which the NIA came into possession of the funds, how and by whose or which authority the funds were made available to the NIA, and to establish whether or not there has been a breach of the law or security procedure in obtaining custody and use of the funds.

“The President has also directed the suspension of the Director General of the NIA, Ambassador Ayo Oke, pending the outcome of the investigation.

“A three-man Committee comprising the Hon. Attorney-General of the Federation and Minister of Justice, and the National Security Adviser, headed by the Vice President, is to conduct both investigations.

“The Committee is to submit its report to the President within 14 days.

“The most senior Permanent Secretary in the SGF’s office, and the most senior officer in the NIA, are to act, respectively, during the period of investigation.”

Last month, Lawal insisted he was innocent of the allegations leveled against him over the N1.3billion grass-cutting contract .

PHOTONEWS: Gov. Ambode Meet Special Board Of Enquiry On Alleged Human Right Violation Against Nigerian Army in Its Operation At Lagos House, Ikeja