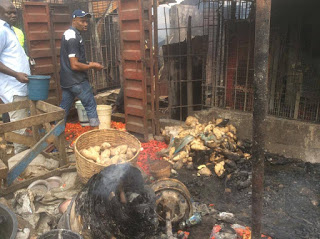 Over 30 youths were this morning arrested in Idi-Oro, Mushin when
youth from Alamutu Street and Alaka-Elegba reportedly engaged themselves
in a free for all resulting into looting and burning of shops and
buildings.

Trouble started when youth numbering over 100 invaded
Idi-Oro market and reportedly demanded money from traders. Youth in
Alamutu Street were said to have resisted the move resulting into a
fight. 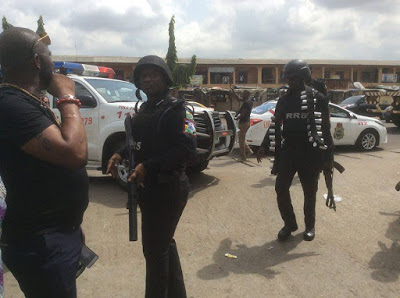 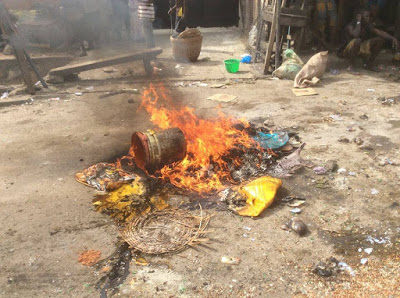 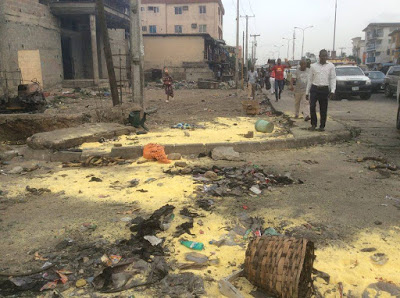 Dangerous weapons like
machetes, axe, rods and bottles were reportedly used during the fight,
which lasted few minutes before more policemen were mobilised.

About three shops and a building were burning when police arrived at the
scene while several goods like beans, bags of garri, fufu and palm oil
among others were wasted on the ground at the scene of the incident.

The hoodlums were reported to have cashed in on the chaos to loot
several food items of market sellers like bags of garri, beans, palm
oil, banana and others.

During the incidence, men of Rapid Response
Squad who were stationed in the area had dispersed the hoodlums with
tear gas before the arrival of more police officers.

Shop owners who later walked in when police men came were wailing over loss of goods in the fire.
A pharmacy store owner who declined to mention his name stated that his
shop burnt because he declined to give the guys N600 when they came in
the morning.

He noted that this was the third time his shop was burnt over crisis in Idi-Oro.
About 30 youth have so far been arrested over the incident. Residents
confirmed those arrested were leaders and gang members involved in the
fracas.

Shops in adjoining streets were closed over the incident
while more policemen from Rapid Response Squad, Taskforce and divisional
police posts around the area have been mobilised to the scene.

Three Terrorists Killed in Another Failed Bomb Attack in Maiduguri