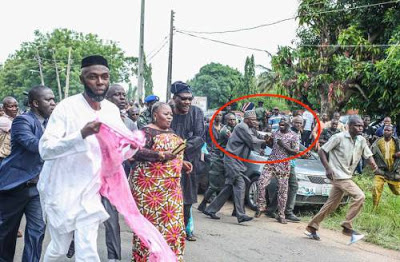 Isiaka Adeleke, the Osun West Senator who died suddenly yesterday in
Oshogbo, the Osun State capital, was killed by an overdose of
painkillers administered to him by an unqualified medical technician,
SaharaReporters has learned.

The Senator received the medication following complaints of serious
pain in his legs at the beginning of day-long political rally and
meetings.

A source at the Osun State Ladoke Akintola University Teaching
Hospital said the late Senator recently began preparations to run for
governor in the state in 2018.  On Saturday, he embarked on a series of
political events, before heading out to the events he was complaining to
his about the pain, and a quack administered the painkillers
intravenously, relieving him of the pain.

When he woke up he complained of chest pain and fatigue, shortly
after telling his aides not to allow any visitors to see him he had a
heart attack and was pronounced dead at Biket Hospital in Oshogbo.

Since his passing, youths in his hometown of Ede have been rioting,
alleging that the Senator was poisoned to prevent him from running for
governor.  The riots forced the state government to order an autopsy at
LAUTECH Teaching Hospital.

SahararReporters learned that preliminary results from pathologists
showed that the intravenous medication, fluid laced with a huge quantity
of painkillers conspired to block his heart leading to a heart attack
that killed him.