Re: Awe Is A Drunkard – Fayemi

The report making rounds that one of the gubernatorial candidates in the Ekiti election in APC, Dr. Kayode Fayemi, insulted the state party chairman may not be true afterall, according to Fayemi’s camp.

This was made known in a press release signed by Fayemi Support Group, FSG. Find below:

It has come to our notice a statement credited to the former governor of Ekiti State and Minister of Mineral Resources, Dr. Kayode Fayemi, where it was alleged that he called Ekiti APC chairman, Hon. Jide Awe a drunkard, whose access to such exalted position was made possible by him.

We hereby affirm that Dr. Fayemi is a gentleman and a honourable man, who would never utter such words against anyone not to talk of the person of the state chairman.

We would like to assure the good people of Ekiti State and members of APC that as far as Hon. Awe is concerned, we are confident in and loyal to his leadership and would never rock the party or bring it to disrepute.

Dr. Fayemi stays focus on his dream to reposition Ekiti State and safe the foremost state from economic downturn it is presently undergoing.

He assured his supporters to kindly disregard any statement accredited to him, as such is just a product of the imaginations of his political distractors.

We hereby invite all good people of Ekiti State to join us as Fayemi formally declares this Saturday, 14, April 2018, at the APC Party Secretariat, in Ado Ekiti.

As the party primary draws close, no amount of political propaganda would derail the emergence of the tested and trusted Dr. Fayemi as the party flagbearer and eventual governor of Ekiti State in the election. 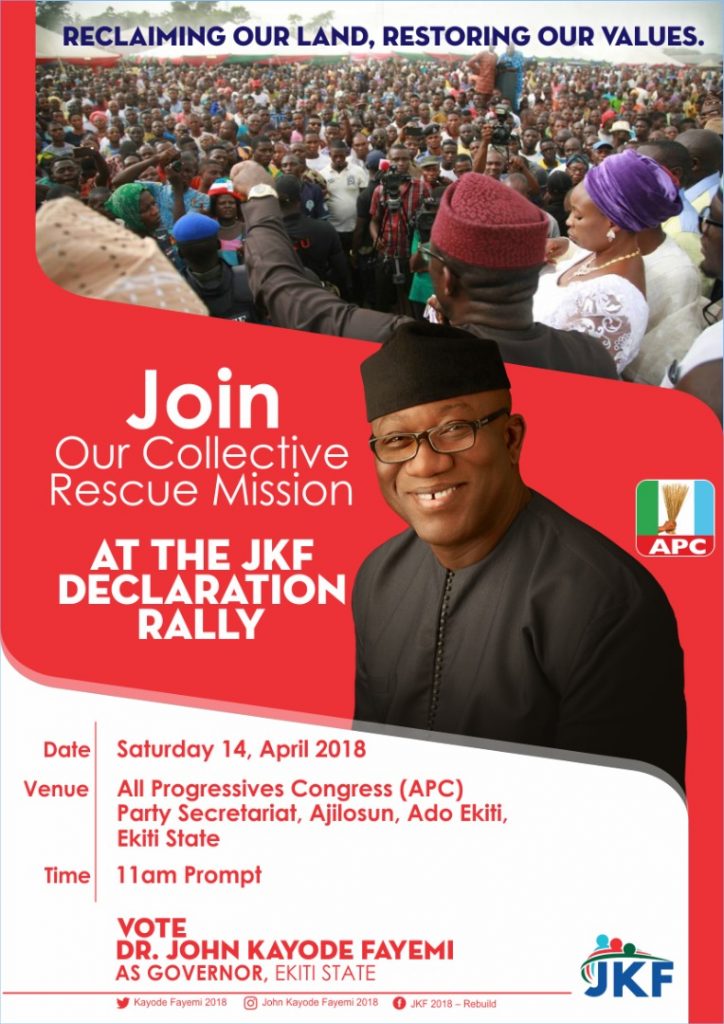 2023 Presidency: There Is Serious Gang-Up Against Tinubu In APC – Henry Ajomale