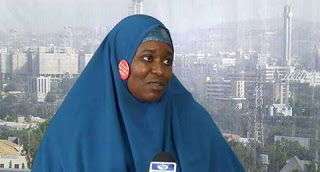 The co-convener of the Bring Back Our Girls, BBOG, has urged President Muhammadu Buhari to remain in the United Kingdom, UK as Acting President, Yemi Osinbajo was doing well.

The activist, who had recently called on the president to resign, said
the best Buhari could do as President was ‘to assign the best people to
work, while he supervises.’

Recall that Buhari had been on a
10-day vacation in the UK , during which he said the Vice President,
Yemi Osinbajo would be in acting capacity, as the President.

The
Presidency had also announced that Buhari wrote to the senate to extend
his vacation indefinitely due to ‘health issues,’ , an action that has
drawn so much condemnation from Nigerians.

In a series of tweets
‏@AishaYesufu, she said, “All President Buhari @MBuhari needed to do was
to get the best people while he supervises and provides a vision using
@ProfOsinbajo to work.

“Even my business I run it that way. Get
the best people to do the work. I strategize and provide vision while
chilling out lazily.

“I say it always @ProfOsinbajo was the person that won me over to the ticket.

“He hit the campaign trail even before GMB did.

“It is for me and that PMB is not putting his best foot forward is so irritating.

“PMB has never been known to do the work he delegates.

“The “witches” that escape today because they are today’s power will wake up to one morning where power is out of reach!

“They should also use technology to determine the “age” of the signature. Many backdate these deeds…”