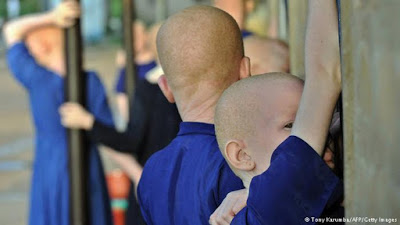 In Mozambique’s northern province, months
without news of an albino abduction have caused sighs of relief. That
is, until now, and the abduction of a child in Ngaúma district.
Four individuals broke into a house while
the family was sleeping and abducted a seven-year-old boy with albinism
on January 31. So far, there has been no sign of either the kidnappers
or the child.
The police are investigating the case.
“At this moment, efforts are being made to rescue the minor,”
corporation spokesman in the province Alves Mate says, although the
authorities have not yet clarified the circumstances of his abduction.
This is not the first time that people
with albinism have been abducted in the province. The abductions are
related to superstitions which attribute magical powers to albinos’ body
parts. Many end up being killed or maimed.
“Hands tied”
The provincial delegate of the
Association of People with Albinism Trindade Guilherme says that the
situation is more critical in rural areas. He says his hands are tied on
the matter.
“Here, in the city of Lichinga, it has
happened twice (albino kidnappings), one of the abductions even
culminating in the death of the kidnapped young man. This is very
troubling for us, and I do not know what we can do to overcome this
situation.”
In Mozambique, there are laws that
protect people with albinism, but authorities often fail to catch the
kidnappers. Denunciations are few and police resources scarce.
Harder laws
The Mozambican province of Niassa borders
Tanzania, a country considered to be the main market for trafficking in
people with albinism. This poses several challenges for the Mozambican
authorities, Guilherme says.
“It seems to me that Tanzania has already
been able to neutralize [the trafficking], because the Tanzania has the
death penalty and they use it rigorously,” he says, adding, however,
that “it is not true to say that the problem has been overcome, because
it is a really difficult problem to overcome”.
Guillerme says the situation requires
tougher laws, rigorously enforced. “We albinos living here in Niassa
province and in Mozambique generally, ask the government to at least try
to create a law that can defend us, so we can move freely throughout
the national territory.”
Previous Post