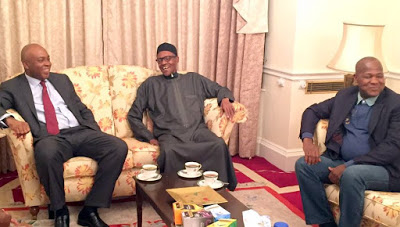 Some opposition lawmakers on Thursday
questioned the non-inclusion of one of them in the National Assembly
delegation that recently visited President Muhammadu Buhari.

The
lawmakers, including House Minority Leader, Leo Ogor, suggested there
was a decision to exclude members of the Peoples Democratic Party, PDP,
from the visit even though one of them – Ike Ekweremadu – is the Deputy
Senate President.

Notwithstanding, the PDP lawmakers —exactly a
half dozen in total— who spoke with PREMIUM TIMES in separate telephone
interviews ,Thursday evening, said they were happy to learn from the media that the visit was productive and the president was in good health.

The
reactions came a day after Senate President Bukola Saraki travelled to
the United Kingdom with Speaker Yakubu Dogara and Senate Majority
Leader, Ahmed Lawan, to see Mr. Buhari in London.
The trio arrived in London around Wednesday evening and met with President Muhammadu Buhari.
Mr.
Buhari left Nigeria for London on annual vacation January 19, with a
promise to return on February 6. He also noted that he would see his
doctors while there and handed over power to Vice President Yemi
Osinbajo.

But on February 5th, a day before he was due to return,
the president sent another letter to the National Assembly, informing
lawmakers of his intention to extend the trip until his doctors complete
‘a cycle’ of medical examination on him.

The prolonged absence, which came amidst raging economic crisis, got many Nigerians worried.

Although
he had telephone conversations spread over several days with
individuals, including Messrs. Saraki and  Dogara as well U.S. President
Donald Trump, startling rumours about his health persisted.

But the visit by the National Assembly leaders on Wednesday helped convince many Nigerians that the president was not dead or bedridden.

Mr. Saraki declared in a Twitter update shortly after seeing the president that there was “no cause for alarm.”

Mr. Dogara reported Mr. Buhari was “fit as a fiddle.”