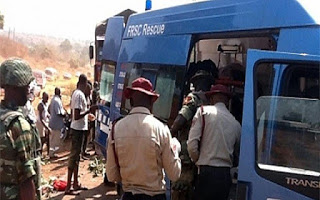 At least 35 persons have been confirmed killed in an auto crash that
occurred on Sunday on the Yola-Ngurore road in Adamawa State.


The accident reportedly happened after a trailer conveying cattle
traders and their livestock tumbled after its driver lost control.

A witness, who lost two relatives in the accident, said the trailer
was going from Song in the northern part of Adamawa state to Yola.

“It was so fatal. About 40 people died and 30 sustained injuries in
the crash which also saw the death of 15 cattle,” said witness, Abdu
Ngurore.

The state chairman of the National Union Road Transport Workers,
NURTW, Bello Ngurore, who helped in evacuating the bodies, said all the
passengers aboard the trailer were cattle traders coming from Song.

“The driver of the trailer lost control, tumbled down the expressway, and spilled out the passengers,” he said.

The Adamawa state Police spokesman, Othman Abubakar, however put the
number of those that died in the accident at 35. He said 28 others were
injured.

“It is obvious that the driver was speeding and suddenly lost
control of the vehicle. The trailer was loaded with passengers and
cattle,’’ he said.