by metronews
in Education, Event, News
0 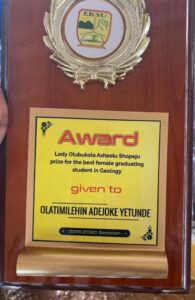 It is a feat like no other as the Geology Department of Ekiti State University, stood out in flying colours at the recent convocation ceremony of the University.

Adejoke Yetunde Olatimilehin has always been an A-list student, maintained throughout her years in the Dept hence her remarkable feat is not surprising but expected on campus, she’s also involved in all other extracurricular activities. However her flying grades over the years kept her in a class of her own!

During this year’s convocation ceremony, Adejoke’s score stood at a First class, CGPA 4.56, one that is considered a very rare occurrence especially in the Geology department of Ekiti State University.

According to Prince Soji Ehinlanwo, the Chairman of the university’s Endowment Committee, for bagging a 1st Class Degree in Geology, Olatimilehin Adejoke won an Convocation Award endowment, instituted by Lady Olubukola Ashaolu Shopeju to her Alma Mater.

All Awards comes with a monetary incentives to motivate and encourage other students to put more efforts and do better.

Lady Olubukola Ashaolu-Shopeju, is an Irish Nigerian, glamorous top socialite, a foreign and local entrepreneur, project manager and mining consultant, who we also found out has also been involved in many other humanitarian services to that same Geology Department, was not at the convocation ceremony due to a tight schedule abroad, relayed her message to the lucky graduand:

“Your 1st Class Degree is very rare as diamond in the Department of Geology in Ekiti State University. So I am very proud of you, Adejoke. You are highly commended for running a good race. Keep on moving and making us proud- Your Parents, The Varsity and I.” the message read.

According to Adejoke, she said “It was a rough journey at the beginning with everything seemingly unachievable as I never planned to study geology, I wanted to be a medical doctor like other parent’s wish for their children who studied science subjects but I was informed that there wouldn’t be an admission for medicine that year which made me to opt for my optional choice ie. “Geology”.

Adejoke mentioned what interest her most about studying Geology, “ it is the fieldwork/trip whereby we examined and described rocks which could in turn gives important and needed information of such rocks. In some cases also gives the history of the environment in which such rocks were formed and found.

She also made mention of what motivated her, she stated “I am easily motivated by other people’s success as I always have this feeling that I can be like them even strives to be better. Sharing her experience of what motivated her in her second year was when a senior colleague approached her and said “Joke, with these your results, if you can maintain it, you can be the first female first class graduate in the department “ and I held onto these words as if it was really meant for me and I started picturing myself in it, working towards it as if everything depends on it. I went for it and with prayer eventually, God made me the “Best female graduating student”

Yes, being successful in everything I do and also doing things that sets me apart and above standards are what motivated me. Hence I give my all to everything that will always make me stand out.

Equally shining as stars along with Adejoke at that convocation ceremony that day amongst others, was Samuel Awoleke, EKSU Overall Best Graduating Student.

Samuel Awoleke said that he has always wanted to be the overall best student at the university. And with 4.85 CGPA, he emerge as best graduating student in Geology department and overall best in EKSU.