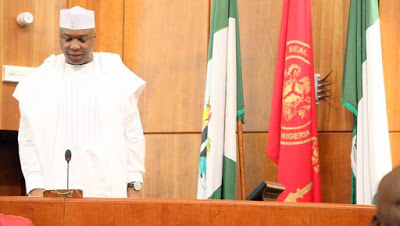 It
is a shame that a party that enjoyed popular votes in the last
elections is, like a snake, determined to destroy itself from the
inside. And then it is true the saying that when two elephants fight,
the green grass suffers.


Unfortunately
in our own case, our grass is not even green.

It’s now a popular opinion
everywhere that the only opposition party in Nigeria is APC. Funny? No,
it’s not.

Have you seen this gibberish recently?

The
Senate President Bukola Saraki will be visiting Houston Texas on May
4th, 2017 on an official visit. On Friday May 5th and Saturday May 6th
he will be present at a Town Hall event at Crown Plaza Suites Hotel,
9090 Southwest Freeway, Houston. Let us Nigerians in Houston show him
our displeasure with his actions along with those of his colleagues in
the National Assembly by protesting his presence.  We cannot allow these
rogues the pleasure of a peaceful visit to the USA while they leave our
fellow Nigerians languishing in misery back home!

PLEASE PASS THIS AROUND TO ALL NIGERIAN HOUSTONIANS! ENOUGH IS ENOUGH!!

Yes, it is absolute baloney and an insult on our collective entity as a people.
Some
disgruntled few, who are not even up to 2% of the total Nigerian
population are hell bent on destroying Nigeria under the guise of
fighting a corrupt Senate President!
Let’s analyse the above paid article camouflaged as an innocent opinion.
The
information being circulated is vague. The originator forgot to inform
us what really the Senate President is going to do in Houston.
For
it to state the dates and time he’s visiting, without stating his
primary assignments for such visit, is nothing but an intentional
attempt to mislead innocent Nigerians and whip up unnecessary
sentiments!
The
statement was also not even signed to mask the identities of the
sponsors. They would rather go anonymous from the onset with ‘As
Received’.
Nobody is contesting that our leaders are corrupt, but we need to respect the institutions the legislators represent.
The
good deeds of the Red Chambers didn’t generate noise because most of
them are focused on working silently rather than political photo ops.
If
we don’t remember anything, the controversial 2016 budget padding was
made known by them! And even the President Muhammadu Buhari accepted
that there were lots of foreign insertions in them!
Why is Saraki going to the U.S.? It is true that Sen. Olubukola Saraki is going to Houston based on invitation.
It is also true that he’s to spend the number of days as carried in the statement above.
But
what is not true is that he’s going on jamboree, rather in the interest of
Nigerians living in the United States. Besides, he is also yet to
consent to going or not. See where these paid irritants goofed!
Saraki was invited based on the bill he supported allowing Nigerians in diaspora to be part of elections in Nigeria.
It
has been the aspirations of many Nigerians abroad to get involved in
the activities of their governments and the Senate President has been
pursuing the realisation of this dream from day one that he assumed
office.
Let’s ask
ourselves, if a three day invitation warrants protests and embarrassing
the number 3 citizen of the country, then what would we suggest the
Nigerians in the UK should have done when President Buhari went on an
indefinite medical vacation there?
Nigerians
have been used in the past to protest against its government to achieve
some political aims of the few political elite, let us say enough is
enough for any instigation against our leaders.
Let’s
ask the real questions of what is really the relevance of such protest
to the future of our children and the generations unborn
If they say the Senate is corrupt, and there is need to protest, what should we say of the executive?
Let’s
not throw away the baby with the bath water by allowing some few
disgruntled elements, who want to pull down Saraki at all costs without
respect to his office, at the detriment of the whole nation, dictate for
us.

Shall we even ask what are Saraki’s sins or has there been anywhere
he was convicted of any malfeasance? We are just quick to judgment even
when we are as guilty too.

We should protest, but not at the dictates of a few political vultures hiding behind concerned citizenry.

Let’s
always ask questions; let us ask the right and relevant questions. We
are not zombies that anyone can maneuver at his whims, please.

Enough
of this orchestrated madness!