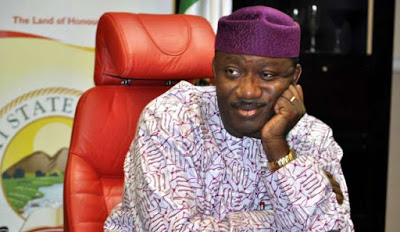 The Ekiti State House of Assembly has imposed a fine of N1m on the immediate former governor of the state, Kayode Fayemi, for failing to answer three summons served on him.

The fine was part of the resolutions reached by the lawmakers at their plenary on Tuesday in Ado Ekiti.

Remember he was last summoned to appear before the House on Feb.7.

The House at its plenary sitting in Ado-Ekiti frowned at the failure of the former governor to appear before it for two consecutive times since March 8, 2016, when he was summoned.

The House, therefore, condemned the attitude of the former governor, saying he was responsible for the setback being witnessed in the education sector in the state.

Dr Samuel Omotosho, a member of the house said “the house is empowered by the constitution of the Federal Republic of Nigeria under Section 129, Sub section 6, to issue a warrant of arrest to bring him before the court.’’

Another member of the House, Mrs Titilayo Owolabi said that the former governor should be given another opportunity to appear before the House on Feb.7.

She said that former governor should be compelled to obey  the summon as “nobody is above the law’’.

Mr Ekundayo Akinleye, another member, expressed dismay at the damage the former governor had caused the state, alleging that it led to high level of illiteracy in the state.