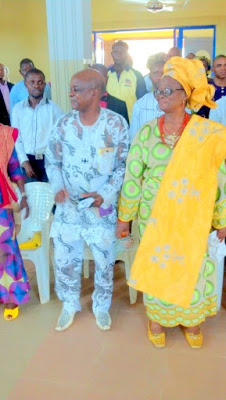 Olori
Grace Faduyile, the wife of Oba Babatunde Faduyile, the Abodi of
Ikaleland on Sunday celebrated God’s faithfulness for her rescue from a
foiled abduction by a five-man kidnappers on Jan. 15 at Ikoya in
Okitipupa Local Government Area of Ondo State.
Olori
Faduyile during her thanksgiving service at the Gospel Faith Mission
International (GOFAMINT), Bethel Assembly in Okitipupa, said that it was
God Almighty that arranged her freedom.
While
recounting her ordeal, she said that the armed kidbappers took her and
one of her aide through the waterways for over two hours to unknown
destination before they were rescued by local hunters and security
agencies.
She
added that one of the kidnappers was killed in a gun duel by the local
hunters and police as one was arrested alive while the other three fled
to the bush along Ikoya waterways.
Olori
Faduyile thanked God Almighty for making her and her aide to regain
their freedom also thanking the local hunters, the police and all the
Ikale nation for their swift actions to battle the kidnappers in a gun
duel.
“I just don’t know what to say but to continue to praise God for bringing me and my aide back alive to his sanctuary today.
“I
also thanked local hunters, security agents and all Ikale indigenes for
their quick response and solidarity for regaining my freedom,” She
said.
Meanwhile,
Pastor Frank Akinsuyi, a brother to Oba Faduyile initiated Grace
Faduyile Foundation (GFF) which would be used to reach out to the poor
masses in Ikaleland.
The
Canada based pastor pledge financial support to assist the foundation
saying that poverty was ravaging the land and needed to be given due
attention.
“I am so happy because my brother’s wife was resued hale and hearty because by now, we will be looking for ransom to rescue her.
“So i initiated this foundation and will support it financially everymonth to support the poor masses with food items to rid off hunger in the land,” Akinsuyi said.
Well
wishers including Akinsuyi and pastor of the church, Dr. Richard
Adesoji trooped out to the church auditorium to celebrate with Olori
Faduyile.
Previous Post