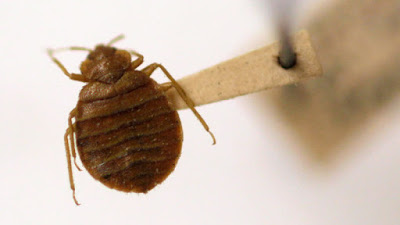 If you’ve had bed bugs, you know that the damage they inflict is largely psychological.
Yes, they feed on human blood, and if you are allergic the bite marks
they leave can blow up to painful welts, but long after you’ve healed,
long after they’ve been exterminated from your living space, their
presence lingers. Any piece of black lint becomes a reason to drop
everything and scrutinize to make sure they didn’t return; any communal
space outside your home can inflict paranoia as a potential spot where
you may pick them up. Unlike other household pests, bed bugs aren’t
known as significant disease carriers (they don’t typically travel far
or at all once they find a host and thus tend to feed on relatively few
humans). Their presence is their primary infliction.

Well, but they can also kill you, a new CBS21 News report suggests.
According to court documents, a 96-year-old Pennsylvania woman named
Mary Stoner died of complications from sepsis after caretaker Deborah
Butler neglected to get Stoner’s bed bug bites treated. (Hypertensive
and arteriosclerotic cardiovascular disease were also contributing
causes to Stoner’s death.)
From CBS21:

Police visited Butler’s home in Hanover on West Baltimore
Pike where they say they observed another elderly woman in her care.
Police say the home was so severely infested with bed bugs, they could
see them crawling on the residents’ bodies, pillows and all throughout
the home.
Butler told police she had been working to get rid of
the bed bug problem since September 2015, but was unable to fully
resolve the matter, adding she could not afford to pay for an
exterminator.

Witnesses said they observed Stoner
“all bruised” and “moaning in pain.” Butler claimed that she took Stoner
to the doctor in January 2016 because she was “scratching her neck” and
“sick to her stomach,” but said it was caused by anxiety. She didn’t
tell the doctor about the bed bug infestation at the assisted care
facility she runs, and so Stoner was diagnosed with a scabies infection.
CBS21 reports that when Stoner’s daughter picked her up, she noticed
her mother had severe skin rashes. Stoner was taken to the hospital,
treated, and released. Two days later she was readmitted for pneumonia
and then died.

Butler has been charged with neglect and involuntary manslaughter.