NO TO PREMIUM TIMES’ NEW FOUND LOVE FOR FICTION AS JOURNALISM 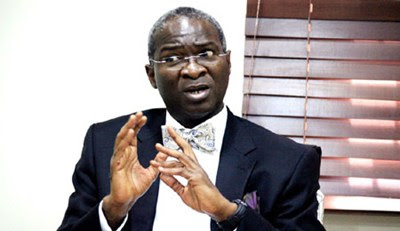 The
attention of the Office of the Hon. Minister of Power, Works and Housing, Mr.
Babatunde Fashola SAN has been drawn to another sensational offering from the
platform of the Premium Times.

Without
doubt, the so called “Special Report” with the screaming headline  “Works
Minister, Fashola, in N166 billion contract mess” fits perfectly into an
emerging pattern by Premium Times to
create fiction, avoid obvious facts and sensationalise headlines in  order to draw
attention and sell its struggling platform.

It
is a known fact that the media industry, like other sectors, in the economy,
faces challenges thrown up by the recession.
Indeed, the challenges of the media industry precede the recession.  However, while the Federal Government and
well meaning Stakeholders, including the media, are working assiduously to address
the challenges, constantly muckraking and deliberately maligning public
officials and institutions should not replace the age long responsibility of
the media to hold government accountable to the populace.

Examining
the mischievous report published by Premium Times readily shows the obvious
contradictions and the less than altruistic intentions therein.

To
start with, the report established the fact that there was an Evaluation Committee
made up of a Chairman and Members who are ranking professionals in their own
right.  Even by its own admission, the
report that went to the Bureau of Public Procurement  (BPP) was the work of the Evaluation Committee
which does not have the Hon. Minister as member.

Except
the publication was insinuating that the Committee colluded to perpetrate fraud
for itself and the Ministry, which is not the case, then going  to town about “Fashola” being in a “contract
mess” leaves much to be desired.

The
Premium Times contradicted itself by
alleging a “contract mess” and yet admitted  that the Ministry of Power, Works and[LA1]
Housing followed Due Process by advertising projects to be awarded and sending
the list of selected contractors to the Bureau of Public Procurement.  If the Ministry does what is expected of it
by law and the institution of Government that it went to did its job, in what
way does it amount to a “mess”?

It
is pertinent to inform Nigerians that as at this moment, no new contracts have been
awarded to date based on the 2016 Appropriation and as such no single kobo has
been paid. The ‘contract mess’ which Premium
Times sought to mislead Nigerian citizens with is an exchange of
correspondence between two government institutions to which the Ministry has
adequately responded.

It
is worrisome that whilst Premium Times
devoted its journalistic energy to the correspondence from the Bureau of Public
Procurement, it failed to inform its readers of the response of the Ministry
which comprehensively addressed all the issues raised in the Bureau’s
referenced report. Is journalism now a one-way traffic?

For
the avoidance of doubt, the statutory role of the Bureau of Public Procurement
is to vet contracts to be awarded depending on the threshold.  At the end of its work, it either issues a Due
Process Certificate of ‘No Objection’ or withholds it.  Indeed, even if it issues a Certificate of No
Objection, the last approving authority for the threshold of jobs so
sensationally reported by Premium Times
is the Federal Executive Council and not the Hon. Minister or the Permanent
Secretary of the Awarding Ministry.  It
should be noted that the BPP has the final decision on contract prices and in
previous memos from the Ministry, the Bureau had  reviewed the cost of contracts.

In
a regime emphasising Due Process and underscoring efficient institutions, it
should be a source of worry if the BPP certifies every piece of document that
goes to it as being okay.  So rather than
sensationalise public institutions doing its job, it would be advisable for media
organisations to educate its personnel on how the procurement system works.

Indeed,
it is curious to note, that the frivolous allegations being published by Premium Times and most times often
instantly “boosted” across social media platforms seems to have gained currency
with the resolve of the Federal Government under the leadership of President
Muhammdu Buhari to make budgets work for the people through faithful execution
of projects across the country.  In the
locust years of miserable budgetary allocations to capital development, with scant
regard for Due Process, it would seem all was well.  A question that should aptly end this
clarification meant to set the records straight is: “What do  ‘they‘ want?”

Hakeem is the Special Adviser, Communications to the Hon. Minister

Unilever committed to the growth of Nigeria’s economy