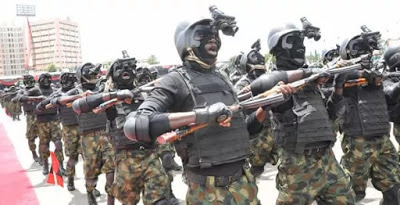 The
final phase of the visit ended in 72 Special Forces Battalion and the
Nigerian Army  School of Military Engineering Makurdi, Benue State.

In his
address to the Officers, Soldiers and Civilian Personnel of the
institutions, General AbUbakar reiterated the commitment of the NA’s
leadership to the welfare of personnel and their families in the areas
of decent living accommodation, medicals, pay and allowances and other
basic necessities.

“In all the Formations, Units and NA Schools
in 82 Division that I visited, one thing appears consistent and
recurrent, and that is, – the ongoing building and renovation of
Officers’ and Soldiers’ Living Quarters”.. We saw this in 13 Brigade,
Calabar, 14 Brigade Ohafia, Abia State, 34 Brigade Owerri, Imo State and
24 Support Engineer Regiment in Abakaliki, Ebonyi State. Other ongoing
accommodation construction are – in the Nigerian Army Language Institute
at Ovim, Abia State, and what we just inspected here in 72 Special
Forces Battalion” – General AbUbakar stated.

While addressing
troops of 72 Battalion, the GOC sensitized them on their constitutional
duties and the peculiar responsibility of maintaining law and order in
Benue and other contagious States. “Let me remind you of the precarious
security situations in your Area of Responsibility – these are – issues
of Communal, Ethnic and Farmers – Herdsmen clashes as well as the Agatu
Crisis”. .. In all these security challenges, you must be more vigilant,
discipline and proactive” – the GOC opined.

“Wherever you are
drafted either for peace enforcement or peace keeping,  – the basic
principles of Internal Security Operations apply, and you must strictly
adhere to them or risk going to jail. Consequently, while on duty,
especially in very likely crisis areas like Agatu, Vandeikya, Logo and
Katsina – Ala axis, you must remain neutral and ready to justify (with
sufficient/compelling evidence) your individual and group action (s) or
inaction (s)”  – General Abubakar hammered.

The GOC commended
the troops for their dedication, commitment and discipline. He urged
them to maintain the professional standards the NA is noted for, as the
NA of today has zero tolerance for indiscipline.

NO TO PREMIUM TIMES’ NEW FOUND LOVE FOR FICTION AS JOURNALISM