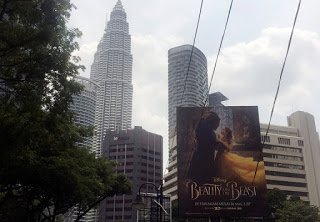 Walt
Disney Studios has refused to cut a brief, gay-themed scene from
“Beauty and the Beast” as demanded by government censors in Malaysia, meaning the film will not open there Thursday as scheduled.

The
Film Censorship Board of Malaysia recently ruled that a shot involving
two male characters dancing in a ballroom must be cut from the movie, on
the grounds that it promotes homosexuality. The sequence is said to be
three seconds long.
“The film has not been and will not be cut for Malaysia,” Disney said in a statement Tuesday without elaborating.
The
film’s director, Bill Condon, has called the scene in question —
involving a character named LeFou, manservant to the villain, Gaston —
as an “exclusively gay moment.”
The $300 million film, starring Emma Watson and Dan Stevens, is a
live-action remake of Disney’s 1991 animated blockbuster of the same
name.
Abdul
Halim Abdul Hamid, chairman of the censorship board, argued Wednesday
that Malaysia was not preventing the movie from being screened. “It is
in our guidelines that we don’t allow L.G.B.T. activity in movies in
Malaysia,” he said in an interview. “They are the ones not allowing the
movie to be shown. We approved it with a minor cut.”
He said the movie would have been shown with a PG-13 rating had Disney agreed to cut the scene.
Malaysia
is a majority-Muslim country, and sodomy is illegal there, although the
law is seldom enforced. The capital, Kuala Lumpur, has a thriving gay
community.
Russia is seeking to ban the movie totally.
Previous Post