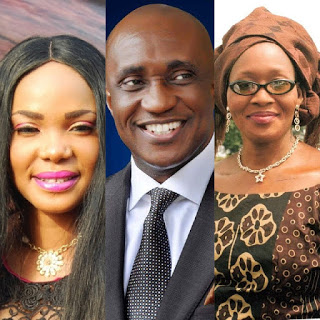 Journalist and blogger, Kemi Olunloyo, says she has been charged with cybercrime for her post about Pastor David Ibiyeomie.

Olunloyo, who was arrested by the police on Tuesday, said in an Instagram post that she was driven to Port Harcourt and detained in a prison there after the pastor complained that she had defamed him in the post.

She confirmed that she had posted a letter from one of Ibiyeomie’s church members, levelling allegations against the pastor.

Olunloyo said she was charged along with a Rivers State journalist, who “simply syndicated” her story, adding that she would remain in prison till March 23 when she would appear in court for another bail hearing.

Olunloyo, who is the daughter of a former governor of Oyo State, had on Tuesday alerted her followers that she was being arrested by the police.

She revealed that officers stormed her home and whisked her away to the Oyo state Criminal Investigation Department office in Ibadan, but added that the offence she was said to have committed was not criminal.

In her post on on Thursday, she said she had been driven to Port Harcourt after her arrest.

The Salvation Ministries, Port Harcourt, Rivers State responded to her earlier post where she alleged the senior pastor, David Ibiyiomie, was having a sexual affair with Nollywood actress, Iyabo Ojo.

In the letter, it was stated that the actress allegedly uses ‘juju’ to
lure the pastor, who has allegedly been showering her with expensive
gifts.

A Daily Post reporter, who also syndicated the report claimed she reached out to the church via its Help Desk mobile contact before publishing but a man, who declined disclosing his identity told her the following:

“You can go on and do the report but I assure you, you will see the end result.

“Go and ask Naij in Port Harcourt the last time they tried to publish this kind of rubbish.

“You know the truth, so I don’t know why you want curses on you.

“What kind of confirmation do you want? That I should tell you my Pastor is sleeping with someone?

“Are you married? May you never have problems in your marriage with this kind of report you are doing.