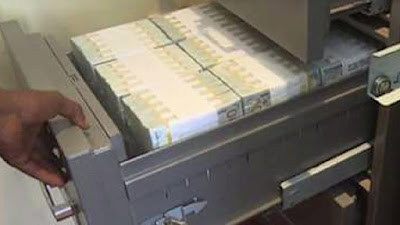 A whopping $43 million in US banknotes has been found in an empty apartment in Nigeria’s largest city after a tip-off about a “haggard” looking woman seen coming and going from the up-market unit.

Nigeria’s anti-corruption agency seized the cash following a raid on the apartment in the Lagos district of Ikoyi, where the “humungous” fortune was found hidden in filing cabinets and behind hidden panels in a wardrobe and kept immaculate in sealed plastic wrappers

The Economic and Financial Crimes Commission operatives found $43.4 million ($AU56 million) along with £27,800 ($US34,807) and 23.2 million naira ($US73,301) in the seventh floor apartment after a tip-off from a person who noticed “suspicious movement of bags in and out of a particular apartment in the building.”

“She comes looking haggard, with dirty clothes, but her skin didn’t quite match her appearance, perhaps a disguise,” said the anonymous source quoted in the EFCC statement.

No arrests have been made over the haul, EFCC spokesman Wilson Uwujaren told AFP.

“It is a major seizure,” Uwujaren said. “For us it shows that the policy of government and whistleblowing is commendable.”

The EFCC has been on the backfoot after facing resistance from the country’s Senate and losing some key court battles.

An Abuja court also dismissed a corruption case against Justice Adeniyi Ademola and his wife on technical grounds.

Earlier in March, Nigeria’s Senate had rejected the appointment of Buhari’s nominee to head the EFCC.

On Tuesday, the beleaguered government was forced to issue a statement insisting that its war on corruption is on track.

“The government of President Muhammadu Buhari is committed to sustaining the anti-corruption fight, ensure that the system is cleaned up and government business is done the right way,” Vice President Yemi Osinbajo said in the statement.

Buhari rode to power in 2015 vowing to stop the plunder of state funds by corrupt politicians and public officials.

The main opposition party, however, has accused him of conducting a political witch-hunt because many of those arrested and charged in the war on corruption are opposition party members or served in the previous administration.