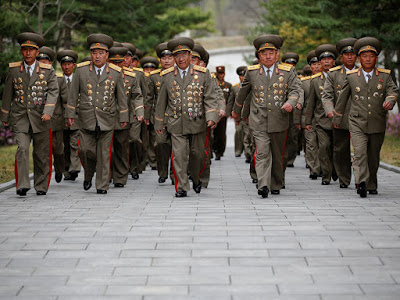 China has warned that conflict could break out “at any moment” over North Korea amid fears it is preparing to launch a sixth nuclear test or more missiles in defiance of UN sanctions and stark warnings from the US.
China’s Foreign Minister Wang Yi said it was necessary to prevent the situation on the Korean peninsula from going down “an irreversible route”.

Earlier, North Korea’s vice foreign minister blamed President Donald Trump for escalating tensions through his tweets and expansion of military exercises, saying the US was becoming “more vicious and more aggressive” under his leadership than it had been under President Barack Obama.

“We will go to war if they choose,” Han Song Ryol told the Associated Press.

“Now we are comparing Trump’s policy toward the DPRK with the former administration’s and we have concluded that it’s becoming more vicious and more aggressive,” Han said, referring to North Korea by its official name, the Democratic People’s Republic of Korea.

“Whatever comes from US politicians, if their words are designed to overthrow the DPRK system and government, we will categorically reject them,” he said.

Speaking through an interpreter provided by the foreign ministry, Han was calm and polite but forceful throughout the 40-minute interview.

The US has sent an aircraft carrier to waters off the peninsula and is conducting its biggest-ever joint military exercises with South Korea.

Pyongyang, meanwhile, recently launched a ballistic missile and some experts say it could conduct another nuclear test at virtually any time.

"Haggard-looking woman" Led To Most Extraordinary Discovery in Lagos, Nigeria - The Daily Telegraph