On July 13, 2015, General Babagana Monguno (rtd) was announced as the new National Security Adviser (NSA) by the current administration. He replaced Sambo Dasuki who had acted in that position in the new regime, for over a month after serving as substantial NSA to the regime of President Goodluck Jonathan for about three years.
General Monguno was widely known as a fine, unassuming army officer during his active service years. During occasional visits to my kind in-law, General Garba Wahab and military press officer, Mohammed Yerima at the Army Headquarters about a decade ago, soldiers and officers did refer to Monguno as a Perfect Gentleman in the military uniform. In fact, it was around that period that I learnt he married his anticipated perfect woman, Nafisah Munir while he was an Army General.
Monguno attended King’s College, Lagos and enrolled in the Nigerian Defence Academy 21st Regular Course. He also holds a bachelor’s degree in Architecture and Masters in International Relations.
Some of the positions he held in the military included the Chief of Logistics at the Defence headquarters, Commandant of the Nigerian Army Training and Doctrine Command (TRADOC); Commander, Guards Brigade; Deputy Commandant, National Defence College, and Chief of Defence Intelligence. He voluntarily retired from the Nigerian Army in September 2013 at the age of 56. He left some legacies behind especially on infrastructural development. 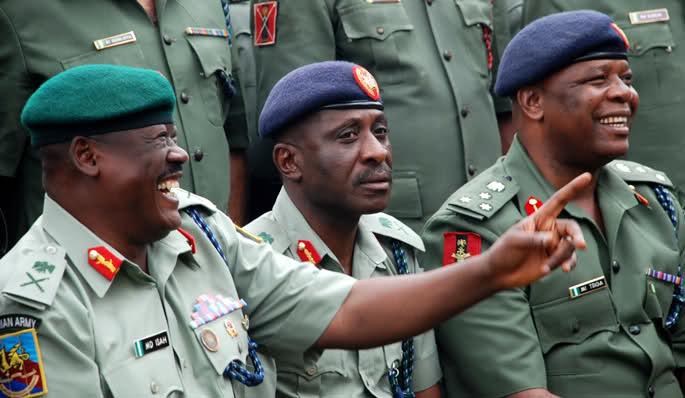 On assumption of office as the National Security Adviser, I had the privilege of meeting him and during our encounters, he was very attentive and receptive to good ideas. He is a man that believes in positive and rapid changes on various national and security issues.
Nevertheless, it is obvious that Monguno is neither a typical Nigerian politician nor act like one, especially on issues that require diplomatic manoeuvrings and assertiveness. Probably, as a retired army officer and an architect, he may be looking at things from the precision of architectural designs and military mentality.
The Office of the National Security Adviser (ONSA), is statutorily empowered by Terrorism Prevention Act 2011 to coordinate and support “all security, intelligence, law enforcement agencies and military services to prevent and combat acts of terrorism in Nigeria.” Therefore, the office is the most powerful after the Presidency in ensuring effective formulation and implementation of comprehensive security and counter-terrorism strategies through synergy.
There is therefore, a greater expectation that ONSA, must be at the forefront in ensuring an inter-agency collaboration. There is no reason to pretend about the prevailing inter-agency rivalries among security organs, even while they record successes on some fronts, notably the war on Boko Haram insurgency.
Some recent developments are quite worrisome: the heated arguments between the NIA and the EFCC over Ikoyi money; the arraignment in court of Air-Force Chiefs of corruption while shielding past chiefs of other security sectors; the laughable tit-for-tat public parades of members of the Police and NSCDC on flimsy excuses by the same sister agencies; the damning DSS reports on Magu among others are clear signs of intense rivalry amongst the security agencies.
Deeply concerned over the development, the Centre for Crisis Communication (CCC) recently called on security agencies in the country to avoid inter-agency rivalry which could damage their individual reputation and the government as a whole.
The Executive Secretary of CCC, Air Commodore Yusuf Anas (rtd), made the call at a special meeting of the Forum of Spokespersons of Security and Response Agencies (FOSSRA) in Abuja sponsored by Nigeria Stability and Reconciliation Programme (NSRP).
Anas said: “We have observed some disturbing trends, blame games and breaches in information disclosures among agencies of government in the media. We have also noticed conflicting information, disinformation and rivalries among respective organizations through the media. These developments can damage the reputation of the agencies involved and give Nigeria a bad image.”
Also, the new Chairman of FOSSRA, who doubles as the Director Defence Information, Major General John Enenche urged members of FOSSRA as the spokespersons of their respective organisations to work in harmony and handle information activities professionally and responsibly.
One fact that is of utmost importance is that spokespersons of security agencies have consistently used their meeting platforms to synergise and collaborate in harmonising security information. Through their interactions, they share professional ideas towards eliminating incidences of conflicting sensitive information released to the public by their organizations. However, and unfortunately too, at their level, there is a little they could do to eradicate the conflict.
It is an open secret that, the surest way of getting damaging and destructive information in the guise of classified information, is to look beyond the officially designated spokespersons to the bosses of the organisations who are frequently cited in the media as ‘highly reliable sources.’
For the sake of emphasis and to address this intractable rivalry, General Monguno as the National Security Adviser should devise strategies and method in bringing leadership of the agencies to a round table for mutual understanding. It doesn’t even need to be elaborate engagements, reaching out to each agency with sincerity of purpose, can play the magic. This is a period where we need to guard against all unnecessary bickering within the security milieu.