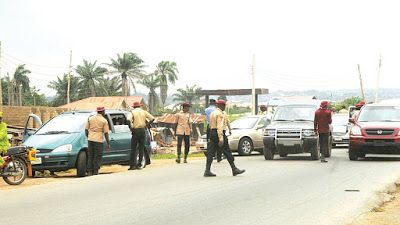 The Federal Road Safety Commission (FRSC) in Lagos said it had
impounded 317 vehicles for non compliance since the commencement of the
enforcement of installation of the Speed Limiting Device on Feb. 1.

Mr Hyginus Omeje, the Lagos State Sector Commander, FRSC, made the
disclosure in an interview with the News Agency of Nigeria (NAN) on
Friday in Lagos.

He said that the corps was making progress in the enforcement and motorists were also complying with the system.

“We are making progress in the enforcement; about 317 vehicles have been
impounded while 368 vehicles have also installed the device out of
1,469 vehicles stopped on the road for verification.
“About 1,109 vehicles were without speed limiters, out of which we ticket 892 and caution 209 vehicles.

“We also caution vehicles, we are there not only to arrest, at times
we caution them on speeding and other necessary things that are needed,”
he said.

According to him, seven mobile courts have been established to prosecute defaulters.

The sector commander also advised petroleum tanker drivers to install
the device in order to prevent unnecessary crashes on the road.

Omeje appealed to the tanker drivers to imbibe the culture of obeying
the traffic rules and regulations and consider other road users in the
course of their journey.

He said that speed limiters would caution and reduce speeding of any
vehicles especially the tankers with highly inflammable substance.

“Tanker drivers should ensure that speed limiters are fixed in their
vehicles, at least it will caution them and reduce crashes as a result
of speeding.

“At the same time, the device will automatically reduce their speed
to 65km per hour which is the normal speed limit for the trucks and
tankers to avoid crashes,” he said.

Mr Bisi Kazeem, the Head, Media Relations and Strategy, FRSC had said
that sector and field commands of the agency had been fully mobilised
for the exercise.