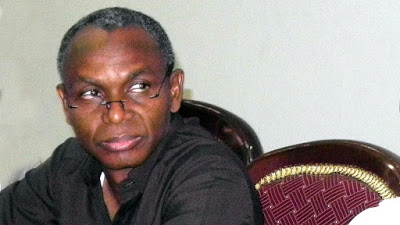 The reported arrest by the police on the order of the Kaduna State Governor Malam Nasir El-Rufai of the Kaduna based correspondent with LEADERSHIP Newspaper, Mr. Midat Joseph can best be described as a serious sign of the growing intolerance of freedom of expression by the Kaduna state government, the Human Right Writers Association of Nigeria (HURIWA), has said.

HURIWA has also pleaded with Media houses in the country to blacklist the activities of Kaduna state government.

HURIWA said Kaduna state government under the current dispensation has gone haywire in clamping into detention too many persons with difference of opinion from the governor especially because of the failure of both the state and federal government to contain the sporadic violent attacks of Southen Kaduna communities by armed Fulani herdsmen who are kinsmen of the Kaduna state governor.

HUMAN RIGHTS WRITERS ASSOCIATION OF NIGERIA (HURIWA) which made the observation has also in a statement by the National Coordinator Comrade Emmanuel Onwubiko and the National Media Affairs Director Miss Zainab Yusuf, HUMAN RIGHTS WRITERS ASSOCIATION OF NIGERIA (HURIWA) affirmed that the constant harassment of voices of dissent and media practitioners by the Kaduna state government under Mallam Nasir ElRuffai does not augur well for a nation that claims to be practicing constitutional democracy.

The Rights group said democracy thrives only when the basic freedoms guaranteed and provided for by the constitution and several global human rights laws are respected and complied especially by those who wield temporary political power.

“Freedom of the press and Right to freedom of information are the kernels that sustains a democratic entity. When those who control tge different layers of political power constantly abuses these powers to intimidate, harass and unduly incarcerate persons with divergent opinions that political space automatically becomes a dictatorship.  Nigerians must reject this gradual evolution of dictatorship in Kaduna state “.

The Rights group which demanded the immediate release of the detained journalist, stated that the frequent misuse and abuse of power by the  Kaduna State governor in clamping into detention of different  journalists and other civil society leaders who disagree intellectually with the governor clearly demonstrates the weakening of respect for the fundamental human rights of citizen in Kaduna State.

Besides, HURIWA has also lambasted the National Human Rights Commission (NHRC) for failing to defend journalists particularly in Kaduna state who have constantly faced arbitrary arrests and detention for filing their stories based on the facts of what has happened  in the field rather than run with the propaganda churned out by the Kaduna state government. “We urge the Nigerian Union of Journalists to blacklist the current Kaduna state governor for constituting a cog in the wheel of democracy and freedoms of the press and Right to freedom of Conscience”.

The rights group stated thus: “we hereby challenge the hierarchy of the National Human Rights Commission to take serious interest in monitoring the violations of the fundamental rights of the citizenry  in Kaduna State by the State governor and the Kaduna State Police Command”.

“We urge the Kaduna State governor to respect the provisions of the chapter four of the constitution which embodies the fundamental human rights such as freedom of information which clearly specifies that “every person shall be entitled to freedom of expression including freedom to hold opinions and to receive and impart ideas and information without interference”.