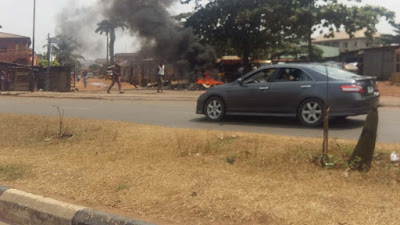 It was a raucous start to a new week yesterday for residents of College Bus-Stop, Igando in Lagos State after a noodle seller, Mallam Adamu, allegedly killed a bus driver, Lekan Adeleke alias Starboy on Sunday night.

But for the intervention of policemen from Area ‘M’ and the Rapid Response Squad (RRS), the crisis would have snowballed into an ethnic war between the Hausa and Yoruba communities in the volatile area.

The deceased’s family have appealed that Lekan’s body be released to them so that he can be buried in accordance with Islamic rites.It was gathered that Adamu used a plank attached with a nail to hit Starboy on the head following a disagreement over a paltry N30.

According to an eyewitness, Kehinde Akinduro, who said he was eating noodles at Adamu’s snack bar when the trouble started, the suspect went berserk after the deceased paid his son N200 instead of N230.

He stated that Starboy after eating a plate of noodles and eggs was told his bill was N230. Being a regular customer, he handed over the N200 he had on him and told the seller he would bring N30 in a few minutes time.

Akinduro said: “The boy then went and told his father that Lekan paid N200 and promised to bring N30 shortly but his father ran after Lekan. People, who saw him running after Starboy to the other side of the road, told him to calm down that Lekan would not eat his money.

“About five minutes later, Lekan brought the N30 and asked the boy if it was because of N30 they wanted to embarrass him. As Lekan was inside the container talking to the son, Adamu just entered with a plank he was holding and hit Lekan on his side. So, Lekan turned around to know what happened. When he saw it was Adamu, he struggled to take the plank from him but couldn’t.

“I was still eating. I left my food and went inside to stop Adamu but he used the same plan to beat me three times. My hands and legs are still swollen. I fell on the ground and I was weak.

“After the struggle, Lekan ran outside. He was about to cross the expressway and did not know Adamu was still coming behind him. That was how Adamu used the plank and hit Lekan on his head. The nail on the plank burst Lekan’s head and he fell on the express.

“When I saw what had happened, I called our colleagues who were on the other side to come.  People who were eating gathered and told Adamu to take Lekan to the hospital, but he was busy pouring water on Lekan’s head.

“When he saw that our colleagues were coming, Adamu and his son fled. Others started chasing him but he used charms to distract people. We called our chairman and he called the police. I chased him too and found him inside a gutter at Ikotun Road. He was hiding under a slab and refused to come out until police came. This thing started around 11:05am.”

Another driver, who gave his name as Eniola, described Adamu as a very violent man, noting that he chased a customer with a cutlass two months ago. According to Eniola, Adamu’s ear was chopped off some years back at Igando because he stabbed somebody to death.

“He fled to College bus stop after escaping death from inside Igando. He’s a very violent man and he likes to threaten people with charms and weapons. We heard the police want to grant him bail. If he’s granted bail, this area won’t contain us anymore. Lekan cannot die in vain. Let justice be done.

“Now, who would care for Lekan’s wife, daughter and mother? He was an only son and he has been taking care of his family. Lekan was a peaceful man. He was like an Alfa. He usually avoided trouble and so, we are not happy the way he was killed. Imagine if it was a Yoruba person that killed a Hausa man? This area would still be boiling now and many people would have been killed.” TG

Omotayo's We Found Love Video Out!

Omotayo's We Found Love Video Out!